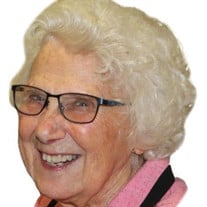 Hastings Funeral Home in Perry is in charge of arrangements for Zola Marie Summerson of Perry. Zola Marie Summerson, 93, was born in Yale, Iowa on April 15, 1927, the oldest of eleven children to William and Fonnie Clark Van Cleave. She died on Wednesday, November 11, 2020 at the Dallas County Hospital in Perry, Iowa due to complications of COVID-19. She was united in marriage to Joe Eugene Summerson (Gene) at the Bayard Church of Christ on January 23, 1949. Two daughters were born to this union, Kathy and Nancy. Zola and Gene worked as partners in their farming operation until his death on September 28, 2005. She continued to live on the farm until age 90, still mowing and gardening. She then moved into Perry and resided at Spring Valley Retirement Community. Zola was active in the Dawson United Methodist Church, Red Cross, Women’s Club and other civic, community, and political organizations. Gardening was a hobby that she enjoyed her entire life. She loved putting her hands in dirt, planting seeds, and then watching the flowers and vegetables grow. Even more than watching her gardens grow, she loved watching her grandchildren and great-grandchildren grow and bloom. Pictures of them were found on the refrigerator door, bulletin boards, and picture albums throughout the house. Her arms were always open to hugs when they visited. Zola is survived by her two daughters, Kathy (Mike) Book, Estero, Florida and Nancy (Lee) Pape, Perry; her four grandchildren, Ann (Randy Gray) Lehnhoff, Scranton; Erik (Kelly) Book, College Station, Texas; Courtney DeLuca, Waukee; and Cody Laird, Ankeny; her nine great-grandchildren, Samantha (fiance Kirby Gathercoal and his son Jakota), Joe, Kaylie, Marisa, and Chloe Lehnhoff, Bailey and Greyson Book, and Camryn and Emmett DeLuca; and her three brothers, George, Joe (Judy), and Donald; sisters-in-law, Brenda Van Cleave, Ruby Van Cleave, Rusty Van Cleave; and brothers-in-law, John Summerson and George Conz. She was preceded in death by her husband of 56 years, Gene; parents, Bill and Fonnie Van Cleave; in-laws, Joe and June Summerson; brothers Paul, Reid, Lloyd (Pete), and Harold; sisters, Melva Conz, Jean Laursen, and Sharon Ayers. Private Graveside Services for her children, grandchildren, and great-grandchildren will be held at the Dallas Township Cemetery in Dawson on November 27, 2020 at 11:00 am. Hastings Funeral Home will have live streaming of the service available. A Celebration of Life for extended family and friends will take place in the summer of 2021 when the family can safely gather outdoors. It is fitting with her love of gardening, music for the service will be “In the Garden,” “In the Bulb There is a Flower,” and “On Eagle’s Wings.” Scripture for the service will include her favorite Bible verse, Matthew 28:20: “I am with you always to the very end of the age.” Since family could not be with her in her final days and hours, she was comforted knowing that she was held in the arms of Jesus. Memorials may be directed to Hastings Funeral Home in Perry for the family to distribute to Zola’s favorite charities.

Hastings Funeral Home in Perry is in charge of arrangements for Zola Marie Summerson of Perry. Zola Marie Summerson, 93, was born in Yale, Iowa on April 15, 1927, the oldest of eleven children to William and Fonnie Clark Van Cleave. She died... View Obituary & Service Information

The family of Zola Marie Summerson created this Life Tributes page to make it easy to share your memories.

Send flowers to the Summerson family.