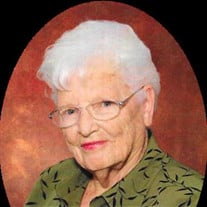 Services for Wilma Jean Clark were held 10:30 a.m. Wednesday, April 10, 2019 at the First United Methodist Church in Perry, Iowa. Visitation was after 1:00 p.m. Tuesday, April 9, 2019 with family present from 4:00 p.m. until 6:00 p.m. at Hastings Funeral Home in Perry. Rev. Paul Burrow provided words of comfort. Honorary casket bearers were: Ella Clark, Olive Clark, Liam Finigan, Brandon Clark, Bryanna Clark, Avery Lenaghan, Audrey Lenaghan, Drew Lenaghan, Penelope Holmes, Clark Holmes, Tucker Holmes and Thayer Holmes. Casket bearers were: Andrew Lenaghan, Ryan Clark, Bryan Clark, Dustin Holmes, Matthew Holmes and Mike Finigan. Musicians were Dennis Morgan and Gini Peters. David Menz was the soloist. Songs chosen were “You’ll Never Walk Alone” and “On Eagle’s Wings.” Recorded song chosen was “Angels Among Us.” Joe Royer was the usher. Interment took place at Violet Hill Cemetery. Following the services at the cemetery was a luncheon in the church hall. Wilma Jean Clark, daughter of Wilbur Arza Clutter and Flora “Lola” Lavica Kuns Clutter, was born November 12, 1929 in Gowrie, Iowa. Her parents were farmers and Wilma grew up with her siblings Phyllis and Curtis. At age six, she started school in a country school house. They lived on a farm two miles south of Slifer until Wilma was 16 and they moved to a farm just south of Gowrie. She had attended school in Gowrie from third grade until she graduated Gowrie High School in 1948. Wilma met Douglas Clark in 1946. They were married December 4, 1948 at the Methodist Church in Gowrie. Doug’s refrigerator schooling took the couple to Minneapolis. At the completion of his schooling, they moved back to Gowrie and their first son James Erwin was born February 26, 1950. The family moved to a farm near Churdan for a year and Doug then worked for the Safeway Grocery Store in Jefferson. The business transferred him to their store in Fort Dodge. Their second son Larry Jo was born November 22, 1953. Later Doug worked for Fareway Stores in Carroll and then transferred to Perry. Their daughter Sandra Jean was born February 19, 1959 in Perry. Wilma was a stay-at-home mother and later worked for a time making candy at the Perry Milk Plant. In 1964 she went to work for Spic and Span Cleaners. Wilma later worked for Holiday House of Kleen. In April of 1969, Wilma and Doug purchased that cleaners and cleverly using a combination of their names, renamed the business Wil Do Cleaners and Self Service Laundromat. Doug retired from his position on the Perry Police Force in 1972 to help Wilma. In 1992 they retired and Sandra purchased the cleaners. Wilma was a hard working business owner and served the community very well. She never drove a vehicle however that never stopped her from being “out and about” because she had her trusty, old fashioned, fat wheel, girl’s bike. They were a duo. For many years Doug and Wilma had spent their winters in Texas and after his death, she continued to winter in her beloved Texas. She had many friends here and in Donna, Texas. Wilma loved to fish and had enjoyed many trips to various lakes in Iowa, Minnesota and Canada. She was a member of the Methodist Church, having joined when she was 12 years old. Wilma loved to bowl, camp, visiting with friends, and of course, ride her bike, and drive her golf cart! She was a member and past president of the BPO Does and also was a member and secretary of the Soroptomist Club. In earlier days she enjoyed the Cree Camper Group and the many friends that brought. Wilma was preceded in death by her parents; husband of 58 years, Doug; sister Phyllis Motsick ; brother Curtis Clutter; nephews Bill Motsick and Ron Clutter. Her memory will be cherished by her loving family, Jim Clark (Kathy) of Papillion, Nebraska; Larry Clark (Janet) of Cumming, Iowa; Sandy Holmes (Ben) of Perry, Iowa; six grandchildren Erin Finigan (Mike); Ryan Clark (Tami); Bryan Clark (Julie); Kris Lenaghan (Andy); Dusty Holmes (Rachael); Matt Holmes (Erin); Great grandchildren Ella Clark; Olive Clark; Liam Finigan; Brandon Clark; Bryanna Clark; Avery Lenaghan; Audrey Lenaghan; Drew Lenaghan; Penelope Holmes; Clark Holmes; Tucker Holmes; and Thayer Holmes; nieces Linda Thomas and Nancy Ahlstrom; nephews Mark and Mike Clutter other relatives and many friends. Memorials are respectfully requested to the Perry High School Food Pantry.

The family of Wilma Jean Clark created this Life Tributes page to make it easy to share your memories.

Send flowers to the Clark family.