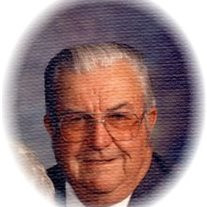 Willis Daniel Blanshan, son of Ernest Willis and Lela Dugan Blanshan, was born September 22, 1917 at the family farm near Grand Junction, Iowa and died August 9, 2010 at The Gardens in Jefferson, Iowa at the age of 92 years. Willis attended and graduated from the Grand Junction School District in 1937. Following graduation, he farmed with his father and served in the National Guard until he entered the United States Army on February 10, 1941. Willis served his nation in World War II. He was trained in Ireland and fought in France, North Africa, Italy and Germany. On June 28, 1945, he was honorably discharged at Ft. Sheridan, Illinois as a Staff Sergeant and was awarded the Silver and Bronze Battle Stars as well as the Good Conduct Ribbon and various overseas theater ribbons and service bars. Following his discharge, he attended G.I. night school. On August 17, 1947, Willis was united in marriage with Alice Irene Bakken at Spring Grove, Minnesota. To this union, five children were born: Marcia, Joe, Ron, Tom and Kevin. The family resided on the family farm where Willis and Alice farmed corn and soybeans and raised livestock. He greatly enjoyed raising cattle, hogs and sheep, especially enjoying the baby animals and young calves. Willis retired from farming in February of 1984. He was a man true to his generation ~ one who never shied away from hard work. He enjoyed flower and vegetable gardening, refinishing furniture, playing cards, watching baseball and traveling. He and Alice were able to take several trips following retirement, including a trip to Germany where he walked the same streets he marched while serving in World War II. He was a member of the Grand Junction First United Methodist Church, the VFW, Farm Bureau and was a member of the Grand Junction City Council. He, along with Alice, were instrumental in raising funds for construction of the Grand Junction Library. He greatly enjoyed his family and supported his children in their 4-H and FFA projects. His grandchildren and great-grandchildren made him proud. Willis had been interviewed numerous times by 4-Hers, high school students and military historians regarding his service in World War II. He was proud of his service and enjoyed sharing his stories with others. Willis was preceded in death by his parents, his son Joe on January 1, 2004, and his brothers Gerald and Floyd. He is survived by his wife, Alice, of Jefferson, Iowa; his daughter: Marcia Blanshan of Ankeny, Iowa; sons: Ron Blanshan and his wife Ellen of Moline, Illinois, Tom Blanshan of Lenexa, Kansas, and Kevin Blanshan and his wife Dee of Waterloo, Iowa and daughter-in-law Jackie Blanshan of Cedar Falls, Iowa. He is also survived by eleven grandchildren: Courtney Behrens of West Des Moines; Mitch Blanshan and his wife Dana, Tim Blanshan, and Jill Blanshan all of Cedar Falls, Iowa; Andrea Wilcox and her husband Phil of Hartford, Wisconsin; Melissa Blanshan of Neenah, Wisconsin; Emily Blanshan, Kelly Blanshan and Leah Blanshan all of Lenexa, Kansas; Eric Blanshan of Boulder, Colorado, and Kelsey Blanshan of Ames, Iowa; three great-grandchildren: Aiden, Lane and Maverick Blanshan; two brothers: Eldon Blanshan of Boone, Iowa and Dale Blanshan and his wife Fran of Fort Dodge, Iowa; nieces, nephews, and many friends. The family requests that memorials be made to the Grand Junction First United Methodist Church.

Willis Daniel Blanshan, son of Ernest Willis and Lela Dugan Blanshan, was born September 22, 1917 at the family farm near Grand Junction, Iowa and died August 9, 2010 at The Gardens in Jefferson, Iowa at the age of 92 years. Willis attended... View Obituary & Service Information

The family of Willis D. Blanshan created this Life Tributes page to make it easy to share your memories.

Send flowers to the Blanshan family.