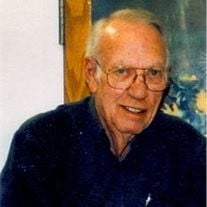 Bill Roy Nicholas was born to Norman Abraham Nicholas and Ella Mae Robinson Nicholas in Rippey, Iowa on September 10, 1931 and died March 19, 2008 at Greene County Medical Center in Jefferson, Iowa at the age of 76 Years, 6 Months, and 9 Days. He attended school in Rippey and later graduated from Jamaica High School in 1949. He worked for the Milwaukee railroad for three years. He served in the U.S. Army from 1952-1954 where he was a Staff Sergeant with the Combat Engineers. Bill was a member of the Engineer Aviation Battalion. Bill married Karen Frances Clark August 28, 1955. He received his B.S. degree from the University of Iowa in Civil Engineering and his Masters degree in Sanitary Engineering. Bill's career included serving as head of the water quality for seven states under the Tennessee Valley Authority. Bill and Karen lived in Chattanooga, Tennessee from 1964-1977 where he was in top management and involved with nuclear power for the largest power plant. The family returned to Iowa, moving to Jamaica in 1978. Bill worked for the Iowa Department of Agriculture until his retirement January 1, 1996. He then worked part time for Beling Consultants which was later bought by Raymond Consultants. Bill enjoyed woodworking, a craft he learned from his father. He remodeled their homes and those of his girls. His passion was playing Cribbage, but he also liked hunting, fishing, reading, and hunting mushrooms. Bill was a member of American Legion Post #687 in Jamaica; a former member of the Lions, Elks, and Moose. He was also in the Honorary Engineers Fraternity. In Jamaica he was very active with the Jamaica Senior Citizens Community Building and had chaired the Centennial Celebration in 1982. Bill was preceded in death by his brothers, Wayne and Robert, and sister, Alice Naylor. Bill is survived by his wife, Karen; daughters, Denise Park of Weslaco, Texas, Rhonda (Curt) Nelson of Jamaica, Iowa, and Lori ( Rob) Trout of Des Moines; grandchildren, Kristi Park, Kelly Villalobos, Kyle Park, Megan, Molly, and Nicholas Nelson; great-grandchildren, Aaron, Anthony, and Austin Rodriguez, Devin, Christopher, and Alexa Villalobos; brothers, Ed ( Wilma) Nicholas of Perry, Daniel (Patricia) Nicholas of Daytona Beach, FL., Harold Nicholas of St. Joseph, MO., and Frank Nicholas of Brooklyn, NY; sisters, Norma Hull of Perry, Donna (Doug) Young of Sylmar, CA; brothers-in-law, Duane Bennink of Ames, and Ronald (Ginny) Clark of Atlanta, GA; sisters-in-law, Linda (Douglas) Holmes of Algona, and Lynda Nicholas of Lake Elizabeth, CA., uncle, Ralph Robinson of Grand Junction; and aunt, Evelyn Rose of Amarillo, Texas; other relatives and friends.

The family of William Roy Nicholas created this Life Tributes page to make it easy to share your memories.

Send flowers to the Nicholas family.