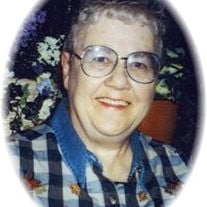 Waneta Faye Plath, daughter of Samuel Delbert Anderson and Ruth Minerva Raaz Anderson, was born October 22, 1934 in Jamaica, Greene County, Iowa, and died March 11, 2009 at the Boone County Hospital in Boone, Iowa, at the age of 74 years, 4 months and 19 days. Growing up, she lived in Cooper, Iowa. She attended and graduated from Rippey High School in 1952. Waneta played basketball throughout high school and was on one of Rippey's finest teams. Waneta was very musically talented, playing the piano by ear and participating in all vocal and band opportunities. She married William Gene McCall on July 31, 1953 in Coralville, Iowa. They later divorced. On January 20, 1961 she married Harold Otto Plath in Des Moines, Iowa. Waneta worked at the Woodward State Hospital Schools for 31 years, retiring in 1996 as a supervisor. She was an expert at finding asparagus. She enjoyed puzzles, her family and friends, and loved dogs. Among her adopted dogs were her neighbor's "Riley" and family's :"Disco" and "Kennedy". Waneta was a member of Seventh Day Adventist Church in Boone and also was a member of the Red Hat Society. Waneta was preceded in death by her parents, and two brothers, Wayne and Larry. She is survived by her children, Dan McCall and wife Cindy of Dayton, IA; Denise Stofer and husband Dave of Jefferson, IA; Dena Sprecher and husband Keith of Ogden, IA; Charlie Strom and wife Carol of Nevada, IA; and Dev Plath and wife LaRay of State Center, IA; 9 grandchildren, Jeremy Dodson and wife Amanda; Traci Stofer; Erinn Wolf and husband Caleb; Dr. Chris Sprecher; Dr. Matt Sprecher and wife Jo-el; Logan and Caden Strom; Jordan and Leah Plath and three great grandchildren, Aspen Dodson, and Jayden and Addison Wolf. Waneta is also survived by her sisters-in-law Patricia Riley of Grand Junction, IA and Colleen Anderson of Rippey, IA; nieces, nephews, other relatives and many friends.

The family of Waneta Plath created this Life Tributes page to make it easy to share your memories.

Send flowers to the Plath family.