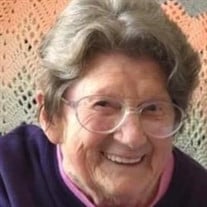 Graveside Services for Vivian Anna Somotherman were held 2:00 p.m. Thursday, October 15, 2020 at Violet Hill Cemetery in Perry with visitation one hour prior to the service also at the cemetery. Mr. Tom Stone of Perry provided words of comfort. Honorary casket bearers were Billy Carpenter, Donnie Carpenter, Joe Schoening and Richard Springer. Recorded music selected was “In The Garden,” “I’ll Fly Away,” and “You Are My All In All.” Vivian Anna Smotherman, daughter of Charles Herman Springer Sr. and Bertha Alburnice Russell Springer, was born April 13, 1926 in Perry, Iowa and died October 8, 2020 at the Perry Lutheran Home at the age of 94. Vivian was baptized in the Christian Church in Perry on May 18, 1941. Her first job was picking strawberries, she helped farm, babysat, and worked at the Thriftway Grocery Store. Vivian graduated from Perry High School in 1945. On February 9, 1946 Vivian and Floyd H. Rans were united in marriage in Troy, Kansas. She helped Floyd with his trucking business, gas station at Priebes, and then worked as a switchboard Operator for the Telephone Company. The couple divorced and Vivian found love again with Robert Charles Smotherman Sr. and they were united in marriage on March 9, 1956 in Omaha, Nebraska. The couple was blessed with a daughter, Linda Ann Smotherman. In 1957 they moved to Glendale, California where Vivian worked for Baxter’s Laboratory cleaning cabins. They moved to Woodward, Iowa in 1982 and after a couple years purchased an acreage. Vivian was a lifelong member of Disabled American Veterans Auxiliary, and the Christian Church in Perry. She enjoyed gardening, canning, fishing, camping, and reading. Vivian liked to send cards to family and friends and she also liked to collect salt and pepper shakers. She was preceded in death by her parents, first husband Floyd Rans in 1983, second husband Robert Smotherman Sr. “Bob” in 2000, daughter Linda Ann Morgan in 2014, son Bob Smotherman Jr “Bob” in 2011; brother Charles Springer Jr. and his wife Zada, and sister Irene Hanselman and her husband Everett. Vivian is survived by her son-in-law Patrick Morgan of Silver City, IA; grandson Brandon Taylor and his wife Susie of Glenwood, IA; Daughter Roberta Carpenter of Perry, IA, grandson Billy Carpenter and wife Nicky of Perry, IA; grandson Donnie Carpenter and wife Denise of Perry, IA; and many great-grandchildren and friends.

Graveside Services for Vivian Anna Somotherman were held 2:00 p.m. Thursday, October 15, 2020 at Violet Hill Cemetery in Perry with visitation one hour prior to the service also at the cemetery. Mr. Tom Stone of Perry provided words of comfort.... View Obituary & Service Information

The family of Vivian Anna Smotherman created this Life Tributes page to make it easy to share your memories.

Send flowers to the Smotherman family.