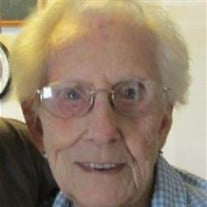 Mrs. Vernetta Ruth Doty age 99, of Mountain Home, Arkansas passed away Monday, September 23, 2019, in Mountain Home. She was born on April 27, 1920, to Ira and Charlotte Palmer in Bayard, Iowa. She married Vernon S. Doty in June 1941. They farmed until moving to Jefferson in 1948. Mrs. Doty was a homemaker and she also worked as a secretary. She worked for Gamble-Skogmo for a number of years. She moved to Arkansas in 1971 and was employed by The Credit Bureau in Mountain Home for seven and a half years. She also worked for Twin Lakes Plumbing and Dewey and Sons Plumbing until retiring in 1988. She made her home in the Midway and Mountain Home area. She was a member of Hopewell Baptist Church. She is survived by her grandchildren: Devin (Stacie) Bruggeman of Navarre, Florida, Jerald Bruggeman of Wichita, Kansas, Jason (Teresa) Bruggeman of Mountain Home, Twylla , Jeri, Patrcia, Ricky, Randy, Rachel, Rhonda, Rhodny, and Ryan, one sister, Anna McCollum of Mountain Home, many great-grandchildren and a host of nieces and nephews. She is preceded in death by her husband Vernon, her parents, children: Ruth Ellen Joyce and Gerald Doty, brothers: Harold Palmer, Albert Palmer, sisters: Pearl Masters, Hazel Seifert, Florence Brown, Charlotte Shadd, Mary Pickard, Loretta Palmer, and Freda Rudolph, and two granddaughters: Joyce Ann Renken and Mattie Beth Joyce. Visitation will be held Thursday, September 26, 2019, at Roller Funeral Home in Mountain Home, Arkansas from 12:00-1:00 p.m. funeral services will follow the visitation. Hastings Funeral Home in Perry is in charge of final arrangements for Vernetta "Ruth" Doty, 99, of Mountain Home, Arkansas and formerly of Bayard and Jefferson, Iowa. Mrs. Doty passed away September 23, 2019 in Mountain Home, Arkansas. A Graveside Service will be held 1:00 p.m. Saturday, September 28, 2019 at the Highland Cemetery in Bayard, Iowa.

The family of Vernetta "Ruth" Doty created this Life Tributes page to make it easy to share your memories.

Send flowers to the Doty family.