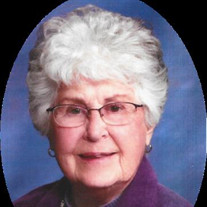 Verla Jean Ridnour, daughter of Charles Willard Ellis and Edith Mae Smith Ellis, was born October 10, 1924, on a farm near Jamaica. Verla died September 13, 2019 at the Dallas County Hospital at the age of 94 years, 11 months and 3 days, just a few days shy of her 95th birthday. Verla was born ten years after her six brothers, and she was always loved and cared for by them. She graduated Jamaica High School in 1942. On February 18, 1944 she married Richard “Dick” Ridnour at the Christian Church in Perry. As Dick was serving in the U.S. Coast Guard, Verla traveled to Galveston, Texas where he was serving and returned to Perry when it was not possible to be with him. When Dick returned after his discharge, they began farm life. The couple was blessed with children Ronald and Ronda. They ultimately farmed and lived on the Berkley road for 35 years. Ron and Ronda attended school in Berkley and remember many good friends there. She was a fabulous cook, with her pies being favorites. Verla raised chickens, sold their eggs, and prepared many good chicken dinners. She had a great ability to become a vital part of any and every community in which she lived and wherever her children were involved. Verla and Dick were a very friendly, outgoing couple and enjoyed their many associations whether it be school, sports, 4-H, church, card clubs or bowling. They always took an active role in any endeavor they pursued. Verla was a beautiful seamstress and had worked as a tailor for Lord’s Clothing. She also worked at the Hallmark Store. Verla was a longtime member of the First United Methodist Church in Perry where she was always active. She took leadership roles in United Methodist Women and Sarah Circle. Verla oversaw many funeral dinners. Her membership in Eastern Star in Rippey led to a large tie to that community long before her children attended school there. When the school merger came about, the Ridnour children decided to stay with their Rippey friends and become part of East Greene. Thus, more community ties for Verla!! The family loved to travel together and Verla loved to camp. She and Dick were members of the Good Sam’s Campers. Dick and Verla purchased their acreage, still on the Berkley road. They lived there 16 years before his untimely death in 2001. Verla remained there for 14 more years before moving to Spring Valley Retirement in October of 2015…..and yet another community for Verla to adopt and love. Verla’s family has so many fond memories of her, and she has blessed them with a great legacy. She was always strong, yet gentle; her cup was always half FULL; she was kind and considerate; she was a voracious reader until her eye problems (which she took in stride); a life-long learner. Verla was curious, she could “fit-in”--no-matter what, and she was encouraging. Most of all, Verla loved her family unconditionally. Her grandchildren were so special to her, and she was always interested in what they were doing and how they were doing. Verla’s love reached her extended family and the many who were fortunate enough to know her. Verla was preceded in death by her husband Richard “Dick”; and her six brothers Everett, Bernard, Ward, Delbert, Leo “Short” and Donald. She is survived by and will be greatly missed by her son Ron and his wife Kathy of Ames, Iowa; her daughter Ronda Pierce and her husband Joel of Urbandale, Iowa; five grandchildren: Ryan Ridnour and his girlfriend Sarah; Missy Mlakar and her husband Michael; Mitchell Ridnour and his fiancée Lisa; Justin Pierce and his girlfriend Annette; Mason Pierce; three great-grandchildren: Katelyn Clare, Kendall Jean, and McKenna Grace Mlakar; sister-in-law Roberta Krieger-Findley of Missouri; five nephews; one niece; other relatives and many friends. Visitation was at Hastings Funeral Home on Thursday, September 19, 2019 from 1:00 to 5:00 and resumed at the Church at 8:00 am Friday until the time of the service. Funeral Services were held at 11:00 a.m. Friday, September 20, 2019, First United Methodist Church, Perry, Iowa. Words of comfort were by Rev. Paul Burrow. Honorary casket bearers were Michael Mlakar, Mike Mace, Kathy Mace Skinner, and Coltan Ketelsen. The active casket bearers were Ryan Ridnour, Missy Mlakar, Mitchell Ridnour, Justin Pierce, Mason Pierce and Richard Ellis. Mr. Dennis Morgan was the organist and played and sang Morning Has Broken and Peace In The Valley, the recorded music was What a Wonderful World, God Be With You Til We Meet Again and I’ll Fly Away. Church ushers were Paul Miller and Joe Royer. Interment took place at Violet Hill Cemetery in Perry. Following the service at the cemetery was a luncheon served by the United Methodist Ladies. Memorials are suggested to the First United Methodist Church & Iowa Public TV or may be sent to Hastings Funeral Home Box 204, Perry, IA 50220. [email protected]

The family of Verla Jean Ridnour created this Life Tributes page to make it easy to share your memories.

Send flowers to the Ridnour family.