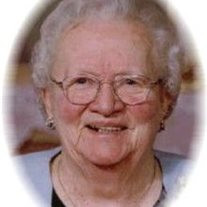 Verda Whitver, daughter of Ralph Emerson Black and Martha Janette Ellsworth Black, was born May 27, 1918 in Scranton, Iowa and died October 7, 2005 at Mercy Medical Center in Sioux City, Iowa at the age of 87 years, 4 months and 10 days. Verda graduated from Scranton High School in 1935. She worked for a time at the Creamery in Scranton and babysat for several families as well as being a nanny for some. Verda married Paul Lawrence Whitver on October 5, 1946 in Nevada, Iowa. They were parents of three children: David, Jane and Tricia. Verda and Paul lived on the Whitver home place in Bristol Township for two years and then moved south of Scranton where they farmed. Paul died July 29, 1991 and in 1992, Verda moved to Ida Grove to be near her family. Verda was a member of Central Christian Church in Jefferson and while in Ida Grove, attended the United Methodist Church with her family. Verda had been active with the CWF in Jefferson and also a Bible Study Group. She loved the outdoors so her life working beside Paul on the farm was especially wonderful. For a time she sold Watkins products. She also kept busy with crocheting, tatting and embroidery and enjoyed Game Shows. Verda was a big Cubs and Hawkeye fan. Fall trips to Deal's Orchard was always a special joy. She had a group of friends that she spent each evening with, enjoying food and fellowship together. Above all, Verda loved her family and was very proud of her grandchildren. She followed their activities the best she could and treasured spending time with her great grandchildren. Verda was preceded in death by her parents, her husband Paul, and her grandson Matthew Hamann. She is survived by her son David of Eddyville, Iowa; her daughters: Jane Hamann and her husband Don of Battle Creek, Iowa; and Tricia Ladwig and her husband Ron of Ida Grove, Iowa; four grandchildren: Ryan Ladwig and his wife Candi; Ross Ladwig and his wife Christine; Nicholas Hamann and his wife Lori and Kimberly Edsen and her husband Daniel. Verda is also survived by Paul's family: Hazel Rasmussen and her husband Jim of Jefferson; Don Whitver and his wife Iola of Boone, Iowa; Bob Whitver of Jefferson and Loren Whitver and his wife Mona of West Union, Iowa; Rebecca Whitver of Jefferson and Mary Whitver of Aransas Pass, Texas; nieces, nephews, other relatives and many friends.

The family of Verda Whitver created this Life Tributes page to make it easy to share your memories.

Send flowers to the Whitver family.