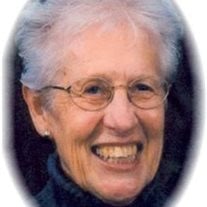 Vera M. Ritter Wright, 74 of Lisbon, formerly of Jefferson, Iowa, died October 8, 2007 at St. Luke's Hospital, Cedar Rapids, from complications due to cancer. Vera is survived by her husband Henry, daughter Robbie Ann (David) Fleener, of Buffalo, Minnesota and their children, Kyle and Krista; Lorrie(Jim) Poland of Cedar Rapids and their children, Joshua, Jared, and Jason. She is survived by her sister Verdell Ritter Algee of Paso Robles, CA. Veral was preceded in death by her parents, Damon and Verna Wright Ritter. She was born at Jefferson, Iowa, May 30, 1933. She graduated from Grand Junction High School in 1951. Following graduation, Vera moved to Washington D.C. working for the F.B.I. for 4 years. She married Henry Wright of Scranton, June 2, 1956 in Jefferson. Henry and Vera farmed together in Scranton until 1970 when they moved to Doughtery and continued farming until retiring to Lisbon in 1994. Veral enjoyed volunteering for 4-H, the American Cancer Society, and Lisbon Elementary School. Her hobbies included sewing, reading, walking, and baking. She served the Lord whereever she lived, and was an active member of the Martelle Christian Church, and a past member of the D.A.R. A memorial fun has been established in lieu of flowers and plants.

The family of Vera M. Wright created this Life Tributes page to make it easy to share your memories.

Send flowers to the Wright family.