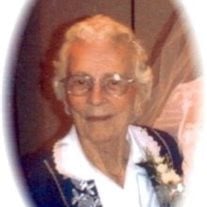 Vava Marie Monthei, daughter of Ervin Bird and Lea Olive Peacock Wood, was born May 8, 1914 north of Jefferson, Iowa and died July 31, 2010 at the Perry Health Care Center in Perry, Iowa, at the age of 96 years, 2 months and 23 days. She attended Grant No. 8 in Greene County through the ninth grade. On June 30, 1931, Vava was united in marriage with Joseph Wilbur "Bill" Monthei at her parent's home near Rippey. They were the parents of three children: Keith, Gail and Judy. Vava and Bill farmed at a couple of places in Greene County before purchasing the farmstead in 1948. They made their home on that farm until Bill entered the Perry Health Care Center in early 1998 and Vava moved into the town of Rippey. Vava assisted Bill with the farming operation and was a homemaker. She enjoyed sewing, crocheting, embroidering and quilting with the ladies at the church. She also enjoyed gardening, crafts, loved to cook, bake pies and visit with family and friends. She was a member of the Rippey United Methodist Church, the Ladies Aide, the Rebekah Lodge, KYNB (Know Your Neighbor Better) and the GAB Club. On March 3, 2009, Vava moved from Rippey to the Perry Health Care Center. She was preceded in death by her parents, her husband, her son Keith, granddaughter LuAnne Wahl, great-grandson Kevin Wills, step-granddaughter Tandy Carter; three sisters: Alda Mantz, Vera Johnson and Irene Adkins, and three brothers: Floyd, Walter and Harley Wood. Vava is survived by her son: Gail Monthei and his wife Carolyn of Rippey, Iowa; daughter Judy Wills and her husband Clair of Jefferson, Iowa; daughter-in-law Patricia Monthei of Florida; eight grandchildren: Michael Monthei and his wife Nancy of Hopkins, Minnesota; Tony Monthei and his wife Kathy of Panora, Iowa; Richard Monthei of Guthrie Center; Dale Monthei and his wife Nancy of Johnston, Iowa; Marc Monthei of Des Moines, Iowa; Carrie McCain and her husband Chris of Ogden, Iowa; Curt Wills of Jefferson, Iowa, and Lynn Lawhorn and her husband Curtis of West Des Moines, Iowa; five step-grandchildren: Lucky Underwood and his wife Nell; Cheryl Carter; Robin Secoy; Stacy Martinez, and Wendy Laswell; her brother Lyle Wood and his wife Doris of Paradise, California; numerous great-grandchildren; nieces, nephews, other relatives and many friends.

Vava Marie Monthei, daughter of Ervin Bird and Lea Olive Peacock Wood, was born May 8, 1914 north of Jefferson, Iowa and died July 31, 2010 at the Perry Health Care Center in Perry, Iowa, at the age of 96 years, 2 months and 23 days. She attended... View Obituary & Service Information

The family of Vava Monthei created this Life Tributes page to make it easy to share your memories.

Send flowers to the Monthei family.