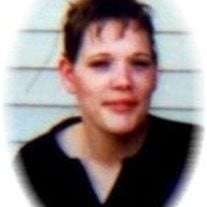 Theresa "Terri" Lee Ritter was born November 4, 1969 in Des Moines, Iowa to Terry Wain Ritter and Patricia Francis Longerbone Potter and died April 4, 2008 at Broadlawns Medical Center in Des Moines, Iowa at the age of 38 Years and 5 Months. Terri as she was known to most people, moved around while growing up, but mostly grew up in Guthrie Center, where she attended school. Terri was a Waitress at various restaurants in Des Moines. She enjoyed music, the outdoors, animals and especially her daughter, Sidney. She is preceded in death by her grandparents, Pat and Lawrence Longerbone, Eileen Mason and Lester Ritter; brother, Jerry Keith Douglas. Terry is survived by her daughter, Sidney Groff of Perry, Iowa; mother, Pat Potter of Dallas Center, Iowa; brother, Lester Ritter (Lori) of Perry, Iowa; aunts Judy Hougham and Donna Thacker both of Dallas Center, Iowa, Loraine Mealer (Tom), and Janet Buckley, both of Dallas, Texas; nieces, Kinsey Rae, and Leslie Ritter; other relatives and friends.

The family of Theresa Lee Ritter created this Life Tributes page to make it easy to share your memories.

Send flowers to the Ritter family.