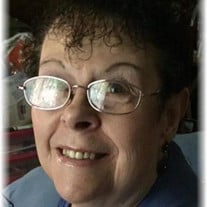 A Celebration of Life Service for Theda Rae Berry was held September 19, 2020 at 1:00 pm at the Social Center in Woodward. Private Family burial was at the Brethren Cemetery in Dallas Center on Sunday, September 20, 2020. Hastings Funeral Home in Perry was in charge of these arrangements. Theda Rae Berry, daughter of Thealin T. Spinden and Alberta I. Stevens Spinden, was born July 5, 1945 in Fort Dodge, Iowa. She grew up in Johnston, Iowa and attended school there, she was in the Nursing and Teachers club during her high school years. On June 22, 1963 Theda and James Berry Sr. were united in marriage in Des Moines, Iowa. The couple had four children: Jake, Patty, Tracy and Bobbie Joe. Theda lived in Missouri for a couple of years, but the majority of her adult life was in Perry, Iowa. She worked as a nurse’s aide at Perry Manor (Pearl Valley) in Perry, also volunteered as a foster grandparent in Woodward & at St. Pat’s School in Perry, plus worked for Perry Outreach Center and New Hope in Perry. She was a kid at heart and enjoyed coloring, watching cartoons & Disney movies, and loved word search puzzles, playing Yahtzee, spades and 10,000. Theda was a big Elvis fan, but most of all she loved her family and friends. Even if you weren’t family, you were family to her! Everyone she met loved her, she had a kind heart. She had faith in God, and she had a very spiritual soul, and she truly believed in heavenly angels. Theda was preceded in death by her parents Thealin and Alberta, brothers and sisters: Gail Spinden, Mickey Love, Connie Wilson and Lawrence “Bud” Spinden. She is survived by her son Jake Berry (Carolyn) of Dana; daughters: Patty Cromwell (Scott) of Perry, Tracy Berry of Perry and Bobbie Joe Swanson (Kevin) of Minburn; fourteen grandchildren: Amanda McAtee of Jefferson, Crystal McAtee of Jefferson, Kimberly Berry Doherty of Casey, Iowa, Jason Berry of Des Moines, Autumn Marie Dolph (Jon) of Maxwell, Mason Zachery Berry of Grand Junction, Jacob Tyler Berry of Dana, Angela Donett Keller of Perry, Jeremy Lee Lawrence of Rhinelander, Wisconsin, Roy James Berry of Perry, Emily Ellen Moen (Matthew) of Minburn, Kevin Dean Swanson, Katelynn Joe Swanson and Jennifer Rae Swanson all of Minburn; eight great-grandchildren; other relatives and many friends

A Celebration of Life Service for Theda Rae Berry was held September 19, 2020 at 1:00 pm at the Social Center in Woodward. Private Family burial was at the Brethren Cemetery in Dallas Center on Sunday, September 20, 2020. Hastings Funeral Home... View Obituary & Service Information

The family of Theda Rae Berry created this Life Tributes page to make it easy to share your memories.

A Celebration of Life Service for Theda Rae Berry was held September...

Send flowers to the Berry family.