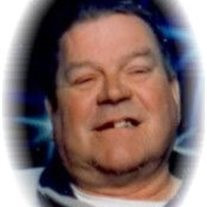 Roy Rex Kilts, the oldest of four sons born to Elba Wayne "Doc" Kilts and Nellie Lucile Bever Kilts, was born at the King's Daughters Hospital in Perry, Iowa, on November 28, 1943 and died June 27, 2008 at the Perry Lutheran Home in Perry at the age of 64 Years, 6 Months, and 29 Days. Rex, as he was always known, lived with his parents in Minburn and later in the Perry area. He attended school in Minburn and later at Gardiner, before entering the Perry school system. Since his father was a farm laborer, they lived in northern Iowa where Rex attended school in Jerico, Chester and Mitchell. In 1956, the family returned to Perry where he attended Perry schools. Rex and his brothers helped with the family business of hauling milk with their own truck. He worked for Progressive Foundry in Perry and in December of 1961 married Gloria M. Walker at the Christian Church in Perry. When the Iowa Beef Packing plant came to Perry, Rex helped build the packing house and then worked in several departments for 25 years until the plant closed. Rex then attended Truck Driving School, graduating at the top of his class. He then worked for a time driving semi-trucks coast to coast. Because he missed his family, he gave up that job and worked at the Perry Ready Mix Cement Company, which he thoroughly enjoyed. He was an excellent mechanic and helped family and friends with their vehicles. Rex loved being chief mechanic on stockcars for Ray Busch and later drove his own. Rex met Gay Beaman in August of 1980. He married his dear friend Gay on June 3, of 1983 in Adel. They had just celebrated 25 years of marriage. Rex was able to be at home where Gay took complete care of him after suffering from a stroke in 2001. He enjoyed being able to travel to town in his motorized wheelchair with his dog, Sophie. Rex entered the Perry Lutheran Home in 2005 where he received loving care and attention from his Lutheran Home family. He was preceded in death by his parents; stillborn brother, Gary Dean; grandchildren, Jason Kilts and Rosa Bermudez. Rex is survived by his wife, Gay of Perry; sons, Bill and Brad Kilts, both of Perry; daughters, Suzi McMullen and her husband Andrew of Claycomo, Missouri, and Brandie Bermudez of Perry; grandchildren, Crystal Fallis and her husband Shaun of Perry, Elizabeth Kilts of Perry, Abby McMullen of Kansas City Missouri, Allison McMullen of San Diego, California, Anna and Katie McMullen, of Claycomo, Missouri; great-grandchildren, Keegan and Alex Fallis of Perry. Other survivors include brothers, Mike Kilts and wife Jean of Eatonville, Washington, and Jim Kilts and wife Marlene of Perry, Iowa; aunts, Marjorie Bever and Shirley Jean Schoorman, both of Milford, Iowa, and Vera Kilts of Spencer, Iowa; uncles, Jerry Kilts and wife Jean of Spirit Lake, Iowa, Verlyn Kilts of Tennessee, and Blair "Hack" Bever of California; numerous nieces, nephews, cousins, other relatives and friends.

Roy Rex Kilts, the oldest of four sons born to Elba Wayne "Doc" Kilts and Nellie Lucile Bever Kilts, was born at the King's Daughters Hospital in Perry, Iowa, on November 28, 1943 and died June 27, 2008 at the Perry Lutheran Home in Perry at... View Obituary & Service Information

The family of Roy Rex Kilts created this Life Tributes page to make it easy to share your memories.

Send flowers to the Kilts family.