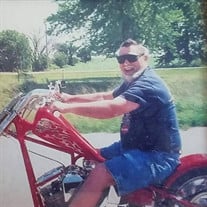 Hastings Funeral Home in Perry is in charge of arrangements for Robert Edwin Johnson Jr. “Wolfie,” 67, of Dawson. Wolfie died December 2, 2020 at the Dallas County Hospital in Perry. Services will be held at a later date. Robert Edwin Johnson Jr. “Wolfie,” son of Robert Edwin Johnson Sr., “Sonny” and Delores “Dee” Conklin Johnson, was born March 9, 1953 at St. Catherine's hospital in McCook, Nebraska and died December 2, 2020 at the Dallas County Hospital in Perry. Wolfie as he was known by loved spending time in his dad’s shop tinkering, building, and creating things and on cars in his teens, and all the family vacations yearly across the country were a favorite too. He graduated from Perry High School in 1971. Immediately after high school he got a job at Oscar Mayer in Perry. Wolfie worked there for many years, and also worked for Farmer’s Co Op. He was united in marriage to Pamala Landles and blessed with one son Scott and later married to Sonjie Nagle and again were blessed with sons Douglas "DJ" and Jay. Wolfie loved Harley Davidson motorcycles and riding the highways & byways checking in on old friends while seeing the country and always the Nebraska Corn Huskers, but what he loved most was his boys and his family, especially his grandparents that he was very close with growing up. Wolfie was preceded in death by his grandparents, parents Sonny and Dee, brother Douglas Johnson, sister Candy Van Meter and nephews Shawn Marchant and Rodney Lambert and many aunts, uncles & cousins. He is survived by his wife Sonjie of Dawson; sons Scott Johnson (Angela) of Newton, DJ Johnson of Dawson and Jay Johnson of Perry; two granddaughters Mackayla and Mackenzie Johnson; sister Sheila Hilsenbeck (Duane) of Ogden, Keith Garfel (Roma) of Manhattan, Kansas, and Dan Johnson (Cindy) of Berkley; aunts Margie Johnson of Omaha, Ne, Linda Conklin of Ogden; uncle Bernard Williams of Perry; nieces, nephews, other relatives and many good friends.

Hastings Funeral Home in Perry is in charge of arrangements for Robert Edwin Johnson Jr. &#8220;Wolfie,&#8221; 67, of Dawson. Wolfie died December 2, 2020 at the Dallas County Hospital in Perry. Services will be held at a later date. Robert... View Obituary & Service Information

The family of Robert Edwin "Wolfie" Johnson Jr. created this Life Tributes page to make it easy to share your memories.

Send flowers to the Johnson family.