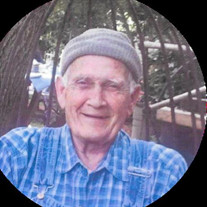 Services for Robert Edwin Johnson Sr. “Sonny” were held 11:00 a.m. Tuesday, January 7, 2020 at Hastings Funeral Home in Perry. Visitation was after 1:00 p.m. Monday, January 6, 2020 with family present from 6:00 until 8:00 p.m. at the funeral home. Rev. Paul Burrow of the United Methodist Church in Rippey provided words of comfort. Honorary bearers were: Red Phelps, Sharon Webb, Marilyn Good, Rich Rogers, Gavin Johnson and Esther Clouse. Casket bearers were: Scott Johnson, D.J. Johnson, Michael Hilsenbeck, Shane Pote, Jay Johnson and Craig Clouse. Dennis Morgan was the musician who played “How Great Thou Art” and “In The Garden.” Recorded song selected was “Drink A Beer.” Interment took place at Violet Hill Cemetery in Perry. Following the services at the cemetery was a luncheon in the Hastings Funeral Home Lounge. Robert Edwin Johnson Sr., first born child of Harvey Roy Johnson and Opal Marian Brewer, was born August 1, 1933 in Fremont, Nebraska. “Sonny”, as he was lovingly called, died at age 86, after a brief but serious illness on January 2, 2020 at Mercy One Hospice in Johnston, Iowa. Sonny grew up in McCook, Nebraska. After his education in the McCook schools he worked for the water department and started his own trenching business. He was united in marriage with Delores “Dee” Conklin December 11, 1951 in McCook. In 1964 the family relocated to Perry where Sonny worked for Oscar Mayer. Sonny and Dee moved to Berkley in 1975, where he was currently living. He retired in 1983 from Oscar Mayer and continued to run his own business "J Co” for many years. Sonny was a tireless worker, doing cat, backhoe, dragline work, along with drilling wells, septic tank maintenance, laying laterals and trenching. Sonny sold and installed solar heaters. He had many interests including dancing, playing cards of all types and teaching card playing to his children. Rummage sales (he was a strong supporter of the Highway 141 endeavors) and auctions held a special attraction for Sonny. He hardly ever missed a Saturday sale at the Perry Sale Barn. He was an avid reader, and enjoyed crossword puzzles and “Mother Earth News”. The family recalls enjoying traveling with their parents. Sonny transformed two buses into "traveling motorhomes". The family feels his love of tinkering in his shop was a profound part of his life. That included collecting many “goodies”, and those would be any and all things metal - from chains, tools and motorized "toys", to machinery! Sonny was a people person and can be fondly remembered with the twinkle in his eyes as he related the many jokes he told. He enjoyed his times having coffee with his friends and he mourned the loss of many of them. McDonalds had been a great part of his daily routine. Sonny and Dee endured much sorrow during their years, their parents, daughter Candy Van Meter, son Douglas Johnson, and grandsons Shawn Marchant and Rodney Lambert, and were always grateful for the family they had. Sonny was preceded in death by his wife Dee on April 23, 2009; also by brothers Leonard Johnson, Swede Johnson, Jerry Johnson, his sister Charlotte Johnson, as well as other family members. His memory is treasured by his children: Sheila Hilsenbeck (Duane) of Ogden; Robert E. Johnson Jr. “Wolfie” of Angus; Keith Garfel (Roma) of Manhattan, Kansas; and Daniel “Dan” Johnson (Cindy) of Berkley; grandchildren: Stephanie Lambert of Berkley; Crystal Lambert of Perry; Douglas Johnson of Dawson; Jay Johnson of Perry; Scott Johnson of Newton; Michael Hilsenbeck (Geneen) of Rippey; Krystal Hilsenbeck (Darrin) of Boone; several great-grandchildren; brother-in-law Bernard Williams and sister-in-law Linda Conklin; many nieces and nephews; other relatives and many friends. Memorials in his name may be sent to Hastings Funeral Home-PO Box #204-Perry, IA 50220, for the family’s later designation.

The family of Robert (Sonny) Johnson Sr created this Life Tributes page to make it easy to share your memories.

Send flowers to the Johnson family.