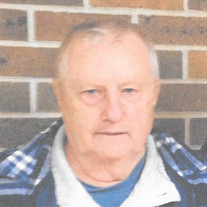 A Celebration of Life Service for Robert Lee Billmeier “Bob” was held 2:00 p.m. Sunday, January 19, 2020 at Hastings Funeral Home in Jefferson with visitation starting one hour prior to the service. Bob’s family and friends provided words of comfort. Honorary casket bearers were: James, Laura, Jacob, Kaylee and Steven. Recorded music selected was “In Color,” “Three Wooden Crosses,” “Daddy’s Hands” and “Even Though I’m Leaving.” Following the service was a luncheon in the Hastings Funeral Home Lounge. Private interment will take place at a later date in the Jefferson Cemetery. Robert was born in Carroll, IA on October 20, 1943 to Steve Billmeier and Ione Werner Billmeier. He died on January 11, 2020 at Regency Park Nursing Facility in Jefferson, IA. Robert was one of six children and lived several places in his lifetime, including Waukee where he married his lifelong sweetheart, Sue Fagan in 1968. They moved to Jefferson in 1976 and this is where their two sons, Ronnie and Tony were born and raised. During Roberts working years in Jefferson he worked at Harrison Ford, Ideal Manufacturing and Chicago Rivet. Robert knew no strangers. He visited with everyone he came in contact with, and "always" thanked a Veteran for their service. Robert loved to be outside. He loved to do yard work, gardening and taking walks, especially with his little dog, Molly. He enjoyed watching NASCAR races and Western movies, as well as putting together model cars. He had a room full of them at one time. He cherished spending time with his family and friends. Robert is survived by his children: Ronnie (Coreen) of Logan, IA and Tony (Sherri) of Missouri Valley, IA; Five grandchildren: James, Laura, Jacob, Kaylee and Steven; one great granddaughter: Jaya Rose; Two Brothers: Leo (Donna) Billmeier and Marvin (Jannelle) Cox; four sisters: Gloria (Ken) Swanson of Tuscon, AZ, Cindy Cox of Esterville, Beverly(Sheldon) Bartruff of Eustis, NE, and Linda (Steve) Dirkx of Kentucky; and a sister-in-law: Sandy Ford of Jefferson and many nieces, nephews and friends. He is preceded in death by his parents, their twin children, his wife and several brothers and sisters in laws and Step-granddaughter Elizabeth. Memorials in Bob’s name may be sent to Hastings Funeral Home 403 N. Elm St., PO Box #253 Jefferson, IA 50129.

A Celebration of Life Service for Robert Lee Billmeier &#8220;Bob&#8221; was held 2:00 p.m. Sunday, January 19, 2020 at Hastings Funeral Home in Jefferson with visitation starting one hour prior to the service. Bob&#8217;s family and friends... View Obituary & Service Information

The family of Robert Lee Billmeier "Bob" created this Life Tributes page to make it easy to share your memories.

A Celebration of Life Service for Robert Lee Billmeier “Bob”...