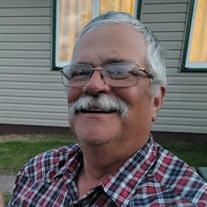 Not sure what to send?

Hastings Funeral Home in Perry is in charge of arrangements for Robert Bebb, 60, of Perry. Robert died December 23, 2021 at Mary Greeley Medical Center in Ames. Visitation will be held January 28, 2022 from 1:00 p.m. until 8:00 p.m. with family present from 5-8 at Hastings Funeral Home in Perry also at 7:30 will be a Masonic Lodge service. Funeral Services will be 10:00 a.m. Saturday, January 29, 2022 also at the funeral home. Robert Duane Bebb, son of Lee Forest Bebb and Ruth Ann Ayres Bebb, was born January 29, 1961 in Jefferson, Iowa. Robert graduated from Jefferson High School in 1979. He met the love of his life Teresa Ann Heater in 1983 and the two were united in marriage on December 29, 1984 in Rippey, Iowa. The couple lived in Bagley for a year, moved to Indiana for a year and a half, and finally in 1987 they moved to their forever home outside of Perry. Robert and Teresa were blessed with four children, Amber Ann, Ashley Renee, Austin Robert, and Alexander Ryan. Robert started his career as a farmer, drove truck for 36 years and would have completed his 20th year driving for Walmart on his birthday. He enjoyed fishing, hunting, and boating when he had the time. He liked to listen to music, especially Bluegrass and Blues. Robert loved spending time with his family especially his kids and grandsons who had a special place in his heart. He was a proud Mason and a member of the Scottish Rite in Des Moines. Robert was preceded in death by his little girl Amber Ann on September 1, 1989; his father Lee on December 5, 2017; and his father-in-law Bobby Heater on January 24, 2019. His mother Ruth Ann passed soon after on December 27, 2021. He is survived by his wife of 36 years Teresa Bebb of Perry; daughter Ashley Bebb Walker (Ezra) of Ogden; sons Austin Bebb and Alexander Bebb both of Ames; three grandsons: AJ Walker, Zane Walker, and Ezekiel Walker; sisters Leann Cox of Prescott, IA, Rose Bebb of Prophetstown, IL, Thelma Roloff (Carl) of Aledo, IL; and brother David Bebb (Diane) of New London, IA; other relatives and many friends.

Hastings Funeral Home in Perry is in charge of arrangements for Robert Bebb, 60, of Perry. Robert died December 23, 2021 at Mary Greeley Medical Center in Ames. Visitation will be held January 28, 2022 from 1:00 p.m. until 8:00 p.m. with family... View Obituary & Service Information

The family of Robert Duane Bebb created this Life Tributes page to make it easy to share your memories.