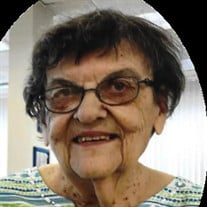 Rita Smithson, 90, of Perry. Rita died Wednesday, August 21, 2019, at the Perry Lutheran Home. Services will be at 10:30 a.m. at Saint Patrick Catholic Church Tuesday August 27. Visitation will be at Hastings Funeral Home in Perry after 1:00 p.m. with the family greeting friend after 4:00 p.m. with a Rosary at 6:45 p.m. Rita is survived by her children, Bob “Stub” Smithson of Perry, Denise Koppenhaver of Perry, Dennis (Jeanann) Smithson of Houston, TX, Jim (Monica) Smithson of Longwood, FL, Ted (Carmen)Smithson of Council Bluffs, Tom (Cheryl) Smithson of Altoona, and son-in-law George Schlagel of Parker, CO. Rita Josephine Smithson, daughter of Jacob Ripperger and Margaret Teresa Kuhn Ripperger, was born July 26, 1929 on her parents’ farm near Lacona in Warren County, Iowa, and died August 21, 2019 at the Perry Lutheran Home in Perry, Iowa after a short stay. Rita was 90 years of age. When young she moved to Perry and worked at the Dime Store. On January 17, 1951 Rita was united in marriage with Floyd ‘Stub’ Smithson. They were blessed with seven children: Dennis, Denise, Linda, Bob, Jim, Ted, and Tom. Rita was a devoted Catholic and in Perry became active in St. Patrick Church. In addition to being a busy mother and wife, Rita always supported her church. She was the head cook at St. Pat’s for over twenty years. Rita was instrumental in starting the rummage sale which occurs twice a year. The sales have always been very successful, providing money for the church and maybe even importantly, offering quality used items and clothing for our community at a more than fair price. Rita was active with the sales over the many years, scaling back in 2010. She was a blessing to Regina Guild, taking leadership roles with funeral lunches and their many ctivities. Rita was known for her cinnamon rolls (among other things) and she passed on her knowledge to the current cinnamon rolls crew. Rita enjoyed the many friends she made at water aerobics. Rita was preceded in death by her parents, husband in 1984, daughter Linda Smithson Schlagel in 2010, and two sisters, Agnes and Ruth. Her memory will be forever in the hearts of her family and friends. Rita is survived by her children: Dennis Smithson (Jeanann) of Houston, TX; Denise Koppenhaver of Perry, IA; Bob ‘Stub’ Smithson also of Perry, IA; Jim Smithson (Monica) of Longwood, FL; Ted Smithson (Carmen) of Council Bluffs, IA; Tom Smithson (Cheryl) of Altoona, IA and son-in-law George Schlagel of Parker, CO. Rita is also survived by her precious grandchildren Elliott Smithson, Eric Smithson, Eli Schlagel (Anneka), Ethan Schlagel, Zach Smithson, Jacob Smithson, Jordan Alasad, great grandsons Ryker Schlagel and Ryker Jager; sister-in-law Gloria Dean Wood, nieces, nephews, other relatives and many friends. Memorials are respectfully suggested to the Regina Guild.

Rita Smithson, 90, of Perry. Rita died Wednesday, August 21, 2019, at the Perry Lutheran Home. Services will be at 10:30 a.m. at Saint Patrick Catholic Church Tuesday August 27. Visitation will be at Hastings Funeral Home in Perry after 1:00... View Obituary & Service Information

The family of Rita Josephine Smithson created this Life Tributes page to make it easy to share your memories.

Send flowers to the Smithson family.