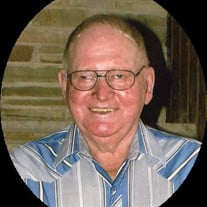 Services for Richard Lavern Morlan were held 10:00 a.m. Monday, April 01, 2019 at the Church of Christ in Scranton. Visitation was after 2:00 p.m. Sunday with family present from 4:00 until 6:00 p.m. at Hastings Funeral Home in Jefferson. Pastor Robert McKnight provided words of comfort. Honorary Bearers were: Becky Faris, Richard Heater, Angie Calzada, Stacy Stream, Nicole Richardson and Jordan Moeller. Casket bearers were: Tim Morlan, Andy Morlan, Mike Morlan, Nick Morlan, Denton Wenger, Bill Wenger and Austin Strother. Laura McKnight was the pianist. Hymns chosen were In The Garden and The Lord Is My Shephard. Interment took place at Dillavou Cemetery in Rural Scranton with Military Rites done by the United States Navy Honors Detail. Following the services at the cemetery was a luncheon at the Scranton Community Center. Richard Lavern Morlan, son of Clyde Richard Morlan and Elizabeth Wright Morlan, was born June 8, 1924 in Greene County, Iowa, north of Scranton. Richard attended country school. His work ethic was cultivated very early on in his life and he pursued a career, shearing sheep. This extremely physical work took him all over Iowa and out west. During WWII he received a two year deferment from the military because of the importance of his profession and the need for wool to make uniforms. In 1944, he was drafted into the U.S. Navy. His first deployment was in Hawaii and then later Richard saw duty on the island of Guam. The Navy Seabees worked on the docks and prepared a mountainous air strip to enable to load and launch the A Bomb on Japan. Before leaving for the military, he had met a beautiful girl from Scranton and she remained in his heart. Audrey Ramona Robbins was that special young lady and they were married February 17, 1951. Discharge May 9, 1946. They were blessed with four children, Ken, Peg, John, and Dave. For years he was active with the Greene County Soil Conservation, Greene County Sportsmans Club, and Greene County Lamb Producers. He sold Iowa State seed corn for most of his farming life. (Can you imagine the cups of coffee and hours of friendly visiting with his farming colleagues that flowed. What a blessing!) He loved to hunt and fish and shared those interests with his wife and children. Ask his children about the deer hunting. He was a farmer and sheep enthusiast all of his life. As a couple they enjoyed dancing, Ten Point Pitch, wintering at Apache Junction, Arizona, state fairs in Iowa, Nebraska, and Minnesota, and the many friends they acquired near and far. And we can imagine that he helped Audrey on many occasions with her chicken chores, dressing chickens and maybe delivering eggs some…..just as she had worked with him on their farms with crops, the sheep and other livestock. When Audrey’s heart issues prevailed, Richard moved with his soulmate to Swan Place. After Audrey’s death May 11, 2018, Richard remained at Swan Place where he continued to receive devoted care; however his love and light were gone. In addition to his loving wife, Richard was preceded in death by his parents, two brothers and seven sisters. This well-respected and loved gentleman will be missed greatly by his family, Ken Morlan (Janice), Peg Gannon of Jefferson, John Morlan of Platte City, Missouri, and Dave Morlan (Shelly) of Woodward, grandchildren Tim Morlan (Nelea) of Ankeny; Angie Calzada (Tommy) of Georgetown, TX; Andy Morlan (Erica) of Johnston; Becky Faris (Jon) and Richie Heater all of Hubbard; Nick Morlan (Krista) of Aurora, CO; David Schlicht (Whitney) of Ogden; Kelly Allison (Joe) of Ankeny; Stacy Stream (Jeff) of Jefferson; Nicole Richardson (Terry) of Pella; Michael Morlan (Valerie) of San Antonio, TX; Austin Strother of Overland Park, KS; and Jordan Moeller of Woodward; great-grandchildren: Reece and Lucas Morlan; Elia, Liam and Coen Calzada; Madison, Blake, and Alivia Morlan; Nate Faris; Emily Morlan;Oliviaand Avah Allison; Brooklyn and Brody Schlicht; Nicholas and Wyatt Stream; and Ethan, Lincoln and Carson Morlan;, sister Zelpha Olson Birger of Texas, other relatives and many friends.

Services for Richard Lavern Morlan were held 10:00 a.m. Monday, April 01, 2019 at the Church of Christ in Scranton. Visitation was after 2:00 p.m. Sunday with family present from 4:00 until 6:00 p.m. at Hastings Funeral Home in Jefferson. Pastor... View Obituary & Service Information

The family of Richard Lavern Morlan created this Life Tributes page to make it easy to share your memories.

Send flowers to the Morlan family.