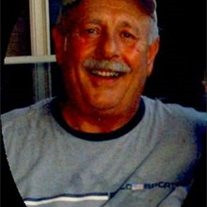 Raymond Dean Ford, son of Hugh Ford and Irene Schissel Ford, was born June 10, 1943 in Cushing, Iowa, and died March 22, 2009 at his home in Perry, Iowa at the age of 65 years, 9 months and 12 days. Mass Of Christian Burial was at 1:00 p.m. Wednesday, March 25, 2009 at St. Patrick Catholic Church, Perry, Iowa. Celebrant was Father David Polich . Jan Pattee furnished the music. His honorary casket bearers were his grandsons Taylor Alliss, Jamie Alliss, Colton Davis and Tanner Davis. Ray's casket bearers were Rob Nevitt, Joe Comes, Steve Ford, Paul Clark, Andy Ford and Kevin Ford. Lector was Sue Andrews. Eucharistic ministers were Vicki Klein and Dorothy Tiernan. Gift bearers were Bruce Klein and Deb Miller. The ushers were Don Meyer and Jim Galligan. Altar servers were Tiffany Hull, Louise Peitz, Danielle Landals and Emily Hill. Burial will be in Violet Hill Cemetery, Perry, Iowa. Ray attended rural school near Stuart and then attended Dowling High School his senior year, graduating in 1961. Ray then joined the U.S. Air Force and received a medical discharge. He worked for the railroad in Omaha where he met Patricia Joan Fickel. They were married November 5, 1966 and were parents of two daughters Christine and Kelly. He went to college for 2 years in Omaha after his marriage. Ray was District Manager of Pizza Hut for several years in Norfolk, Nebraska. He managed a Pizza Hut at Lake of the Ozarks. Ray and Pat operated a family restaurant in Columbus, Nebraska. In the early 80's they moved to Iowa. He enjoyed his years with Golden Sun Feed as a salesman, having won numerous awards. He worked at Woodward State Hospital School for a time and also worked for the Perry Parks Department. "Rayfurd", as he was lovingly called, was a member of the Elks Lodge and used his salesman's skills to increase membership in the Lodge. He had served as an officer. Happy hour with his friends at the Pub, Thursday night cards at the cabin, and Elks canoe trips were special to him. Ray played men's fast pitch while living in Omaha and slow pitch while in Perry. He enjoyed fishing, camping and loved coaching girls softball. Ray helped many of the girls with their pitching. Ray also liked to golf and had enjoyed his membership at the Country Club. Ray and Pat enjoyed many trips and campouts together and many trips with good friends. He was a member of St. Patrick Catholic Church. He was preceded in death by his parents. Ray is survived by his wife Pat, daughters Christine Davis (Justin) of Jefferson, Kelly Alliss (Karl Harris) of Bouton; 4 grandsons Taylor Alliss, Jamie Alliss, Colton Davis and Tanner Davis; 2 brothers Mick Ford (Jane) of Omaha, NE and Bob Ford (Joy) of Paola, KS.. He is also survived by his aunt Nora Schissel of Louisiana; other relatives and many, many friends. Memorials may be sent to: Hastings Funeral Home 1417 2nd St Perry, Iowa 50220 515 465-4691 www.hastingsfh.com, [email protected]

The family of Raymond Dean Ford created this Life Tributes page to make it easy to share your memories.

Send flowers to the Ford family.