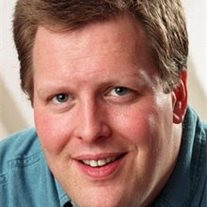 Ray Jay Holtorf, son of Gene William Holtorf and Marjorie Ann North, was born December 6, 1963 in Fort Dodge, Iowa, and died January 29, 2007 in Perry, Iowa, at the age of 43 years 1 month and 23 days. Ray graduated from Fort Dodge High School in 1982 and received his degree from Dartmouth College. During college he played football. Ray was multi talented and had worked at various places. He had worked in Chicago at a bank and then at a Sports Club. He moved to this area and worked at Homemakers in Des Moines, Iowa; Woodruff Construction in Ames, Iowa. He was currently working for the Greene County Medical Center in Jefferson, Iowa as the Human Resources Director. Ray loved working there, enjoying his co- workers and his work. In 1996 he married Rhea Lynn Steffen at the Chapel of the Land - Living History Farms. They were the proud parents of two sons: Steffen Max and Luke Frederick. The family made their home in Jewell, Iowa and had resided in Perry, Iowa for the past three years. Ray was just a very happy person, intelligent and gifted. He's described as a "Big Sweetie" and "Mr. Incredible." He enjoyed his family, loved his wife and sons dearly and was a very special man. Ray was a Hawkeye fan, especially liking football. He also enjoyed fishing and being outdoors. Ray was a good communicator, and with his quick mind, was a natural score keeper for the family's card games. He was a member of First Christian Church and served as a Deacon. Ray was also a member of the Republican Party and his College fraternity. Ray was preceded in death by his grandparents and two brothers in infancy, Robert and Eric. He is survived by his wife Rhea; sons: Steffen and Luke; his father: Dr. Gene Holtorf and wife Dorothy of Fort Dodge, Iowa; mother Marjorie Betten and husband Dwain of Boone, Iowa; sister Laura Collins and husband Craig of Ankeny, Iowa; brothers John Holtorf and wife Lisa of Des Moines, Iowa; and Gene Holtorf and wife Jennifer of Solon, Iowa. Ray is also survived by his mother-in-law Becky McNeil and her husband Mike of Collinsville, Illinois and grandparents-in-law Janette and Walt Howe of Keokuk, Iowa; sister-in-law Janine Brock and husband Nathan of Twenty Nine Palms, California; brother-in-law Jeremy Steffen and wife Lucinda of Campbell River, British Columbia; aunts and uncles: Helen North and Phyllis Lewis and husband Les all of Denison, Iowa; Robert North and wife Lorene of Seattle, Washington; Shirley Sleichter and husband Dr. Charles of Punta Gorda, Florida; Clarcie Thornburg and husband Steve of Johnston, Iowa; nieces, nephews, cousins, other relatives and many friends.

The family of Ray Jay Holtorf created this Life Tributes page to make it easy to share your memories.

Send flowers to the Holtorf family.