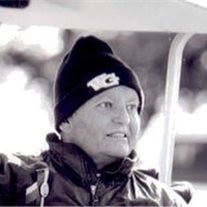 A service for Phillip Moin Creese Sr. was held 2:00 p.m. Sunday, January 13, 2013 at the Woodward Granger High School. Visitation was Saturday from 1:00 p.m. till 8:00 p.m. with family present 4-8 p.m. at the high school. Hastings Funeral Home in Perry was in charge of making arrangements. Pastor Joe Haynes of the First Baptist Church in Spring Valley, Minnesota provided words of comfort. Honorary bearers were Joel and Brandon Robinson. Casket bearers were: Kevin Creese, Brett Wuebker, Jeremy Wuebker, Justin Wuebker, Monte Grossnickle and Steve Gunderson. The Dance was sung by Phil Creese Jr. accompanied by Monte Grossnickle on the guitar. Danielle Bice did a reading and Debbie Wuebker gave a special message of thanks to everyone. Interment took place at the Woodward Cemetery. Following the service at the cemetery was a luncheon at the high school provided by Smoky D's. Phillip Moin Creese, son of Herbert Charles Creese and Evelyn Carol Wolf Creese, was born September 4, 1954 in Guthrie Center, Iowa and died January 9, 2013 at age of 58 years at his home in Woodward, Iowa. As his father's occupation took the family to different locations, Phil attended school in several midwest towns. After his schooling, Phil joined the U.S. Marines where he served three years in active duty and one year in the reserves. Phil was married to Kathy Norgart in1979 and they were parents of four children; Cris, Evan Kelly, Stephanie, and Phillip. They lived in Woodward and Phil purchased their new home in the 1980's and interestingly, it was next to the softball field! Phil worked for Firestone for 32 years, retiring in 2010. Phil was a very generous neighbor and friend and what started as being a helper, turned into his lawn and snow business known as Creese Lawn Care. He started his career in softball coaching in the 1980's, which continued to the present. Phil coached 10 and under, 12 and under and 14 and under…becoming High School coach in 2000. Phil was a very successful coach, taking teams to District play and to State in 2004 and 2010. He was honored as Iowa High School Athletic Association Coach of the Year in 2010 and April 20, 2012, the softball complex was named for him. Phil met Michelle Austin while they worked in the bulk mail center and they married in 1996. She supported him in his love of his family and the Woodward-Granger school, softball and community. Michelle was considerate of Phil's desire to be very supportive not only with time but of money. He could be found walking the ditches of Hwy 141 for pop cans which would be redeemed to support the team's equipment needs and he purchased many bats and balls personally. It almost goes without saying how much he loved his family, especially his grandchildren, but also the many, many softball players and other children and adults he touched throughout his life. Phil is survived by his wife Michelle; his father Herb Creese of Panora; son, Phil Jr. (Colleen) of Woodward; daughters Cris McAfee (Clint) of Osceola and Stephanie Sloss (Rick) of Perry; grandchildren: Kelli and Shawn McAfee, Samantha and Quintin Smith, and Kayli Sloss; brother Kevin Creese of Jamaica; sisters Debbie Wuebker (Jerome) of Perry; Kathy Robinson (Dan) of Altoona; and Sherry Kincaid of Texas; aunts Pat Quessenberry (Bud) of Seymour, MO and Margaret Hammontree of Cape Fair, MO; in-laws Maurice & Jolene Austin; nieces, nephews, many other relatives; 832 softball daughters; and a host of friends. Phil was preceded in death by his mother Evelyn (Wolf) Creese in 1993, his brother Kelly in 1972, son Evan Kelly in 1979 and grandson Gabriel on February 16, 2012; and many loved ones who had touched his life through the years. [email protected] www.hastingsfh.com Perry, Iowa 50220

The family of Phillip "Phil" Creese, Sr. created this Life Tributes page to make it easy to share your memories.

Send flowers to the Creese, family.