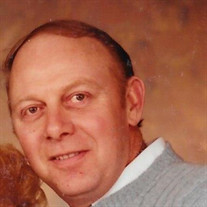 Hastings Funeral Home in Perry is in charge of arrangements for Paul Moore, 81, of Perry. Paul died January 9, 2022 at his home. Visitation will be held from 1:00 p.m. until 7:00 p.m. Thursday, January 13, 2022 at Hastings Funeral Home in Perry. Family will be present from 5:00 until 7:00 p.m. Funeral Services will be 11:00 a.m. Friday, January 14, 2022 also at the funeral home. Paul Edward Moore, son of Floyd Samuel Nelson Moore and Louise Augustus Lass Moore, was born December 7, 1940 in Ogden, Iowa. He attended a one room school in Berkley, Iowa from Kindergarten through eighth grade. Paul then went to Rippey High School and graduated in 1959. He met the love of his life Pauline Ruth Barton and the two were united in marriage on January 17, 1959 at the First United Methodist Church in Perry, Iowa. The couple was blessed with a daughter Kathleen and three sons, Tracy, Jerry, and Gregory. The family moved to a farm outside of Perry for some time. He worked at the Progressive Foundry from 1959 until 1963. Paul worked for Tyson in Perry from 1963 until he retired in 2005. He also did some farming on the side. He enjoyed watching the Kansas City Chiefs, Kansas City Royals, Iowa Hawkeyes, Iowa Cyclones, and the New York Yankees. Paul and Pauline loved to go on vacations especially to the mountains. He was a great cook and hosted Sunday breakfasts for his children and grandchildren. Paul liked Western movies, books, going fishing, and cars. He was preceded in death by his parents Floyd and Louise Moore; six brothers and sisters, Carl Moore, Alice Moore Brooks, Floyd Moore Jr., Gladys Moore Hamman, George “Sonny” Moore, and Beverly Moore Null. Paul is survived by his wife of 62 years Pauline; four children: Kathleen Vestal (Randall) of Kansas City, MO, Tracy Moore (Silke) of Perry, Jerry Moore (Rosetta) of Ogden, and Gregory Moore (Deborah) of West Des Moines; nine grandchildren: Brittany Vestal Duncan of Greenwood, MO, Jacob Vestal of Lakewood, CO, Patrick Moore of Perry, Daniel Moore of Perry, Justin Moore of Ogden, Ryan Moore of Ogden, Kaydin Moore of West Des Moines, Kira Moore of West Des Moines, and Kassidy Moore of West Des Moines; ten great-grandchildren: Wyatt, Addison, Leo, and Gabriela Moore all of Ogden, Sloan Moore, Addison Perks-Rivera, and Iyla Moore all of Perry, Alexis Moore of Grimes, and Emerson and Oliver Duncan of Greenwood, MO; one brother Keith Moore of Ogden; nieces, nephews, other relatives and many friends. DIRECTIONS FOR LIVE STREAM 1. Go to your web browser and type in www.facebook.com/hastingsfuneral 2. Or type in Hastings Funeral Home Perry, Iowa 3. Click on our funeral home website 4. Click on the blue bar that says WATCH VIDEO It should say LIVE in red up in the left hand corner of the video

The family of Paul Edward Moore created this Life Tributes page to make it easy to share your memories.

Send flowers to the Moore family.