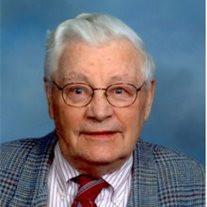 Paul Jay Bardole, son of Nathan Emandus Bardole and Nettie Alberta Bardole, was born February 6, 1913 in Rippey, Iowa and died July 20, 2007 in Rippey, Iowa at the age of 94 years, five months and nine days. Paul attended high school in Rippey, graduating in the class of 1931. He then attended the 4-C's business college in Des Moines during the winter when he was not working on the farm and received his certificate.. Paul was united in marriage with Mary Elizabeth Hawley on August 13, 1939 at the First Methodist Church in Jefferson. Mary and Paul made their home on a farm in rural Rippey, where they raised five children, Jay, Roy, Donald, Dick and Mary Ann. Paul and Mary left their beloved "four square house" and moved next door to their son, Roy, in 2003. Mary died on August 19, 2004 and Paul continued to enjoy his days on the farm. Paul had always loved farming and in the few years he was not an active farmer, continued to enjoy gardening and flowers. He had always enjoyed traveling and rock polishing. Paul was such a solid rock in his church. He served in many capacities including teaching Sunday School most of his adult life, Sunday School Superintendent; being a Lay Speaker, and on each and every board. Paul had been a member of the choir, and his family remembers him singing in a trio with Tom and Pink Grow for many occasions including funerals. Paul had been a youth leader for many, many years and shared his love of God, music, and travel with those at nursing homes, hospitals and the county home. Paul had participated in Community Theatre. Paul was a long time member of the Lion's Club where he had served in every office several times. Paul was past president of the Rippey School Board. He had been a director of the Greene County Medical Center for thirty years, and served twelve of those years as Chairman. Paul had enjoyed his many years of involvement with the Greene County Historical Society and was currently attending those functions. Paul was preceded in death by his parents; his wife Mary; infant twin brother and sister; his twin brother at birth; and brothers Harry, Howard, and Clark. Paul is survived by his daughter Mary Ann Hick and her husband Wm. Kevin of Rippey, Iowa; sons: Jay and his wife Ellen of Vincennes, Indiana; Roy and his wife Phyllis of Rippey, Iowa; Donald and his wife Alice of Davenport, Iowa; and Dick and his wife Jo of Ogden, Iowa;12 grandchildren: Heidi Fornes (Bill); Heather Hubert (Dan); Erin Englin (Owen); Shannon Bardole and Elizabeth Hick; Peter Bardole (Yvette); Timothy Bardole (Lori); Jason Bardole (Allison); Nathan Bardole (Elisa);Stephen Bardole (Jody); Andrew Bardole (Jacki); Wm. Haven Hick (Lisa); 20 great-grandchildren: Margaret, Jane, Amanda, Janelle, Cassie, Schyler, Gabe, Arthur, Avery, Aden , Robert, Hailie, Nic, Geoff, Ben, Emma, Brady, Wm.Henry, Brayden, and Charlie; sisters-in- law: Avis Jantz (Olan) of Jefferson and Virginia Hawley of Arizona; nieces, nephews, other relatives and many, many friends.

The family of Paul Jay Bardole created this Life Tributes page to make it easy to share your memories.

Send flowers to the Bardole family.