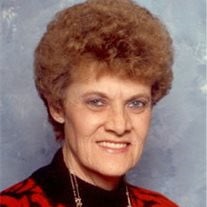 Patsy Joan Stofer Dowd was born May 5, 1931 in Greenbrier Township, near Cooper, Iowa to Claude Stofer and Mary Elizabeth Miller Stofer and died September 2, 2008 at Harvard Rest Haven in Harvard, Nebraska at the age of 77 years, 3 months and 27 days. She graduated from Cooper High School where she was active in basketball. After graduation she was united in marriage with Joy Robert Dowd in Jefferson, Iowa, where they made their home. To this union 4 children were born, Larry, Rodney, Shelly and Michelle. Patsy was a devoted and loving mother, homemaker, and chief cook and bottle washer. When the children got to be school age, she worked at American Athletic sewing trampoline and tumbling mats. She was an experienced roller skater and was on the American Athletic bowling team. In 1971, Pat and the girls moved to Giltner, Nebraska, where she was employed at the Grand Island Munitions Depot, tended bar at the Char-bar and later employed at Dutton Larson in Hastings, Nebraska as a brazier. She retired at the age of 62 and lived in her home in Harvard, Nebraska until failing health required her to move to Harvard Rest Haven where she died. She was preceded in death by her parents, brothers, Ron, Mike, Pete, and Don Stofer, sister, Thelma Guess, and granddaughter, Jennifer Dowd. Patsy is survived by her sons, Larry Dowd of Jefferson, Rodney Dowd and wife Teresa of Perry; daughters, Shelly and husband Mike Gentes of Harvard, Nebraska, and Michelle and husband Tracy Senstock of Lincoln, Nebraska; grandchildren, Aaron Dowd of Santa Barbra, California, Michael Dowd of Jefferson, Jenna and husband Matthew Weber , of Algona, Iowa, Jamie Down of Ankeny, Iowa, Mathew Senstock and Bradley Senstock both of Lincoln, Nebraska, Shelby Gentes and Zacharry Gentes both of Harvard Nebraska; two great-grandchildren Lucas and Kalee Weber of Algona, IA. sisters, Arlis Buttler and Mary Hughes of Guthrie Center, Iowa; brother, Dutch and wife Mary Stofer of Oelwein, Iowa; sister-in-law, Joan Stofer of Jefferson, other relatives and many friends.

Patsy Joan Stofer Dowd was born May 5, 1931 in Greenbrier Township, near Cooper, Iowa to Claude Stofer and Mary Elizabeth Miller Stofer and died September 2, 2008 at Harvard Rest Haven in Harvard, Nebraska at the age of 77 years, 3 months and... View Obituary & Service Information

The family of Patsy Joan Stofer Dowd created this Life Tributes page to make it easy to share your memories.

Patsy Joan Stofer Dowd was born May 5, 1931 in Greenbrier Township,...