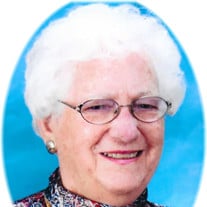 Opal Ellen Ruth was born to Mary Jane and Frank Griswold on February 12, 1923 in Adair County, Iowa. She passed away at the age of 97 at Rowley Masonic Community on May 30, 2020 in Perry, Iowa. Opal attended school in the Greenfield and Fontanelle schools and graduated from Fontanelle High School in 1940. She married Joseph Eugene Ruth on July 19, 1940. They moved to Perry in 1959 where Opal worked in several jobs. She helped Joe in the businesses they had including the Tastee Freeze, the Maid-Rite, the Perry Stationary and others. She also worked at the Stardust Bowling Alley, the King David Restaurant, the Elks Club and was a cook at the Rowley Masonic Home for 5 years. Opal was proud to be President of the Rebekah Assembly for the State of Iowa during the 1993-94 year, the auxiliary to the Independent Order of Odd Fellows. She also served as the local President of the Legion Auxiliary and the local Does Auxiliary. She was a member of the Naomi Circle of the First United Methodist Church and served on several committees and assisted with Sunday School. She loved to crochet, play bingo, and partake in what the casinos had to offer, within limits she always reminded us. She was an avid bowler in her younger years and enjoyed attending the state league conventions every year. Opal is preceded in death by her parents, her husband Joe, and her brothers Paul and Elmer Griswold. She is survived by her sisters Ruth Nevins of Des Moines and Alice (Darrell) Jameson of Greenfield. Also by her daughter Iris Ann (Bill) Coffin, grandchildren Lyn (Glen) Larsen of Oklahoma City, OK, and Bob (Candi) Coffin of Perry. She leaves 7 great-grandchildren: Melinda, Kassie, Jenny, Bridgette, Kory, Derek, and Joseph and 2 great-great-grandchildren, Blake and Piper. She was also preceded by many relatives and friends and left many behind. Our thanks go out to all of those at the Rowley Masonic Community who took care of Opal and loved her. Hastings Funeral Home in Perry was in charge of these arrangements.

Opal Ellen Ruth was born to Mary Jane and Frank Griswold on February 12, 1923 in Adair County, Iowa. She passed away at the age of 97 at Rowley Masonic Community on May 30, 2020 in Perry, Iowa. Opal attended school in the Greenfield and Fontanelle... View Obituary & Service Information

The family of Opal Ellen Ruth created this Life Tributes page to make it easy to share your memories.

Opal Ellen Ruth was born to Mary Jane and Frank Griswold on February...

Send flowers to the Ruth family.