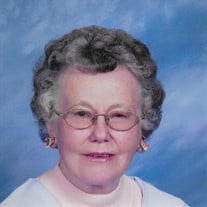 Natalie Adele Parker, daughter of Esther Skoog Erckenbrack and Earl S. Erckenbrack, was born January 27, 1925, in Adams, Minnesota, and died December 16, 2018 at the Rowley Community in Perry, Iowa at the age of 93. “Nan” as she was lovingly known graduated Adams High School in 1942. She received her R.N. degree from the former Kahler School of Nursing in Rochester, Minnesota in 1946. On June 22, 1947, Nan was united in marriage with Donald Mark Parker of Rochester. The couple was blessed with three children Brian, Shelley, and Brad. They made their home in Rochester until January of 1952. Nan and Don moved to Perry, Iowa and purchased Seekin’s Flowers. The business name was changed to Parker’s Flower Shop and it continued for 40 years under Don and Nan’s helm. Ultimately their son Brian owned and operated the business for 21 years. The family was active in the First Presbyterian Church in Perry. Nan served on the Board of Deacons, enjoyed membership in the Presbyterian Women’s Association, and sang in the choir over 44 years. In addition to being a busy homemaker and mother, Nan worked at the Perry Lutheran Home as a nurse for several years, retiring in 1986. She was preceded in death by her parents, husband Donald, brother James Erckenbrack, brothers-in-law Robert and Sam Parker and sister-in-law Doreen Stender. Those left to cherish Nan’s memory are her children Brian Parker and wife Dawn of Perry; Shelley Freisinger and husband Bob of St. Charles. Missouri; Brad Parker and wife Mary of Albuquerque, New Mexico; grandchildren Erin Hansen and husband Eric of Des Moines; Nikki Chambless and husband John of St. Charles, Missouri; Joe Freisinger of St. Charles, Missouri; great-grandchildren Eva and Vivee Chambless and Liliana Hansen, nieces; nephews; other relatives and many friends. Visitation for Nan was be held Sunday, February 17, 2019 from 2:00 p.m. to 4:00 p.m. at the First Presbyterian Church in Perry. Funeral services followed at 4:00 p.m. Memorials in her name may be sent to Hastings Funeral Home, Box 204, Perry, Iowa

The family of Natalie Adele Parker created this Life Tributes page to make it easy to share your memories.

Send flowers to the Parker family.