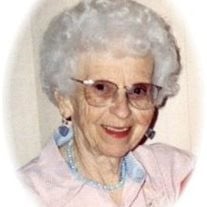 Mildred "Mickie" Evelyn Johnson Riley, daughter of John Walter Johnson and Mary Ann Petch Johnson, was born December 13, 2005 on a farm in Washington Township, Iowa and died December 9, 2005 at the Perry Lutheran Home in Perry, Iowa at the age of 90 years, 11 months and 26 days. Mickey, as she was well known was 1 of 10 children. She was born on a farm south of Perry, Iowa in Washington Township. She attended a country school through the 12th grade. On February 22, 1935, Mildred was united in marriage to Leo B. Riley at the Methodist Church Parsonage in Perry, Iowa. They were the proud parents of two children: Keith and Ronnie. Mildred stayed very busy being a farmers wife and taking care of the two boys. Mildred and Leo farmed in Greene County for many years before retiring in 1973. At that time Mildred and Leo moved into Perry where they have lived since. Mildred had many hobbies. She loved to make dolls as well as sew and do leather work. She also loved flower arrangements. Mildred was preceded in death by her parents; her husband Leo in 2003; her son Ronnie in 2004; 2 grandchildren: Danny and Janey Riley; 7 sisters: Alice Hall, Elizabeth Craig, Edith Carpenter, Lillian Shipley, Gradys Mille, Anna Challands and Olive Challands; 2 brothers: William and Herbert Johnson. She is survived by her son: Keith Riley and his wife Hildy of Perry, Iowa; 3 grandchildren: Randy Riley and his wife Sharon of Rippey, Iowa, Ginger Burrell and her husband David of Boone, Iowa, and Kelly Riley of Weston, Colorado; 5 great-grandchildren: Andy Riley and his wife Jessie of Rippey, Iowa, Josh Riley and his wife Casey of Dawson, Iowa, Lindsey Riley of Bouton, Iowa, Matt Burrell and his wife Becky of St. Joseph, Missouri and Janny Burrell of Boone, Iowa; 2 great-great grandchildren: Brent and Max Riley of Rippey; nieces, nephews, other relatives and many friends.

The family of Mildred Riley created this Life Tributes page to make it easy to share your memories.

Send flowers to the Riley family.