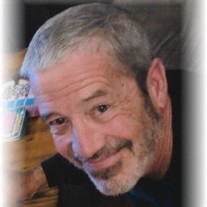 Mickey Guy Fessler, son of Earl Eugene Fessler and Doris Jean Simmer Fessler, was born August 7, 1961 in Perry, IA and died September 30, 2018 at his home in Perry Iowa. Mick lived in Perry all of his life. Mick graduated from Perry High School in 1979. He worked as a painter out of high school and then took a job at Weise Corporation. For the last 20 years he worked at Woodward Resource center doing maintenance and then becoming an RTW. He was an avid New York Yankees fan and was named after Mickey Mantle. He enjoyed golfing, bowling, hunting, gambling, slow pitch softball and horseshoes in the backyard with family and friends. Mick was united in marriage to Jeanie Jo Edmondson on December 1, 1984 in Earlham Iowa. To that union they had two beautiful daughters, Nikki Jo and Dani. One of the things that Mick enjoyed most was spending time with his grandchildren, his daughters and other family and friends. Mick enjoyed his daily drives to absolutely nowhere and would spend hours washing and waxing his truck because of these drives. Mick was preceded in death by his grandparents, his dad Earl Fessler who he lost in 1989, many aunts, uncles and cousins. Mick is survived by his mom Doris Fessler of Perry, IA; daughters Nichole Jo Graham (Jim) of Perry, IA and Danielle Renee Cechovic(Jeff) of Perry, IA; six grandchildren: Jake Graham, Riece Graham, Sydney Graham, Gavin Kercheval, Parker Kercheval and Caiden Cechovic all of Perry, IA; brothers Richard Fessler (Sharon) of Perry, IA and Jeff Fessler of Perry, IA; Uncle Bill Simmer (Velma) of Perry, IA; Aunt Donna Kadolph of Perry, IA; other relatives and many friends. Due to us not being able to fulfill his request of being buried face down so that everyone could kiss his backside, the family is requesting casual attire and no suits because of his passionate hatred for them. Funeral services will be Friday morning at 10:00 a.m. October 5, 2018 at Hastings Funeral Home. Visitation will be after 1:00 p.m. Thursday October 4, 2018 with his family present 4:00 p.m. to 8:00 p.m

The family of Mickey Guy Fessler created this Life Tributes page to make it easy to share your memories.

Send flowers to the Fessler family.