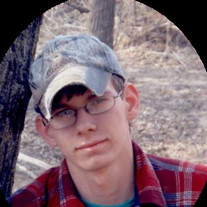 Visitation after 1:00 p.m. with the family greeting friends at 6:00 pm until time of service. Celebration of Micheal’s life at 7:00 p. m Friday, August 24, 2018. Micheal Lee Van Hoff was born September 9, 1989, in Boone, Iowa, to Dennis Carl Van Hoff and Martha Joanne Zollars. He joined his big brother LeRoy. The family lived in Dayton where Micheal attended school through 6th grade. He moved to Guthrie Center where he lived with his mother Martha and step-dad Bob Derry. Micheal graduated Guthrie Center High School in 2008. Hunting and fishing were his biggest interests. He was creative, just ask his Home Ec classmates about his squirrel stew!! Micheal was also a talented craftsman and worker, from beautiful grillwork for his vehicle, and restoring an older Nova. Through his all too short life, he worked on the Pipeline, was employed by Roseacres and UPS, ultimately putting his talents to work for Iowa Granite in Ankeny. Micheal pleased many customers with his beautiful granite countertops and installed numerous in apartments for future college students and residents. The granite work was heavy and resulted in a bad back and surgery. Micheal’s greatest joy were his two little daughters, Maggie who will be three August 23rd and Scarlet who will turn two December 31st. He was a very willing caregiver to his girls and he loved them dearly. Micheal was preceded in death by his grandparents LeRoy “Roy” Zollars, Carl and Mildred Van Hoff, Everett and June Derry, uncle Sonny Van Hoff, aunt Joanie Nichols, and cousin James Teed. Micheal’s memory will be cherished by his parents Dennis Van Hoff of Boone and Martha and Bob Derry of Menlo, precious daughters Maggie and Scarlet; his brothers LeRoy Van Hoff (Tommie Colms) of Boone and his children Tori and Noah; Greg Derry, Jeff Derry (Natalie), sister Sheri McCann (Randy) all of Guthrie Center and grandmother Helen Zollars of Jefferson. Others who survive Micheal are his wife Abigail Van Hoff, and in-laws Ferlin McCalister (Janette Hassler), and Jolene Pray (Kenneth Prosser); many aunts and uncles including the Zollars:, Nancy, Nadine Teed (George), Mary, Bill (Donna), and Norman (Darlene); the Van Hoffs: Carolyn Lee, Janet Anderson, Darlene Lumberg, and Donna Shady (Russ); and the Derrys: Ron (Joan), Lanny (Lois), Mike (Sherrie), Steve (Sue), Rod (Brenda), and Andy (Tracy); many, many cousins, other relatives, and many friends. Interment will be at a later date.

The family of Micheal Lee Van Hoff created this Life Tributes page to make it easy to share your memories.

Visitation after 1:00 p.m. with the family greeting friends at...