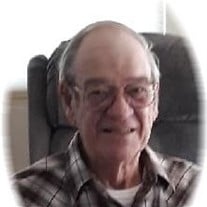 Mervin Laverne Wallace, son of Verne Wilson Wallace and Eva Irene Kriens Wallace, was born January 13, 1938, in Bridgewater, Iowa, and died March 17, 2019, at the Greene County Medical Center in Jefferson, Iowa, at the age of 81 years, 2 months, and 4 days. A Celebration of Life Service was held at10:30 a.m., Friday, March 22, 2019, Hastings Funeral Home, Jefferson, Iowa. Mr. Robert Rogers, Pastor of the Church of Christ, Bayard, Iowa. Music at the service was Could I Have This Dance ~ Ann Murray, I’ll Go To My Grave Loving You ~ Statler Brothers and Will The Circle Be Unbroken ~ Johnny Cash. Mervin was buried at the Brethren Cemetery, Panora, Iowa, Everyone was invited to a time of lunch and fellowship at the Raccoon Valley Golf Course following the services at the cemetery. Mervin grew up in Yale, Iowa, and graduated from Yale High School in 1956. He enjoyed playing softball and loved to fish. Mervin was united in marriage to Delores Marie Cabelka on April 6, 1958, at the Brethren Church in Panora, Iowa. The couple was blessed with a daughter, Lisa, and son, Michael. The family lived in Des Moines and Urbandale for a short time before moving to Jefferson in 1966 and making it their permanent home. Mervin worked as a parts manager for Sid Beattie in Des Moines. When they moved to Jefferson he worked for Harrison Ford, then owned Wallace Standard Station from 1969 to 1971. He was also a carpenter for various companies throughout his life. Before retiring, Mervin delivered parts for NAPA part-time. He was an outdoorsman. He loved going to watch the grandchildren and great-grandchildren’s ballgames. Mervin liked to play golf, watch John Wayne westerns, read, and do puzzles. He was an avid Iowa Hawkeye football fan and especially enjoyed Iowa basketball; he also liked the Chicago Cubs. Mervin’s greatest joy was being with his family and playing with the grandchildren and great-grandchildren. He was a member of the Elks Lodge and Jaycee’s in Jefferson. Mervin was preceded in death by his parents, Verne and Eva Wallace; great-grandson, Chad Ryan Wright; parents-in-law, Raymond and Josephine Cabelka; and brother-in-law, Ronnie Cabelka. Mervin is survived by his wife, Delores, of Jefferson, IA; daughter, Lisa Wright (Leonard) of Perry, IA; son, Michael Wallace (Julie) of Jefferson, IA; three grandchildren: Erika Seals (Bill) of Altoona, IA; Clinton Wallace (Mallory) of West Des Moines, IA, and Emily Taggart (Montana) of Jefferson, IA; five great-grandchildren: Connor Seals, Eva Seals, Cody Taggart, Callen Taggart, and Jack Wallace; sister Norma Louk (Gary) of Yale, IA; other relatives and many friends. Memorials may be sent to Hastings Funeral Home Box 204 Perry, Iowa.

The family of Mervin Laverne Wallace created this Life Tributes page to make it easy to share your memories.

Send flowers to the Wallace family.