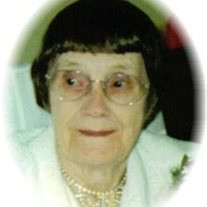 May Marie Lewis Huss, daughter of Willard Lewis and Minnie Christensen Lewis was born May 12, 1911 on a farm near Bayard, Iowa and died August 20, 2005 at the Jefferson Manor in Jefferson, Iowa at the age of 94 years, 3 months and 8 days. May grew up in the Bayard area and attended school in Bayard until her family moved to the Scranton area. On June 27, 1931 May was united in marriage to Charles Robert Huss at the Methodist Parsonage in Carroll, Iowa. They were the parents of three children: Wilbur, Gary and Jimmy. They made their home on a farm in Willow Township between Scranton and Bayard. After living there for about 7 years the family moved to a farm near Paton, Iowa where they lived for about 20 years. In 1959, they purchased a farm near Manson, Iowa where they continued to farm until Charles retired in 1972. At that time, they moved to Jefferson, Iowa where they have lived since. May stayed busy being a homemaker and taking care of her children and being a farmer's wife. May loved to play cards as well as sew and put puzzles together. She was a member of the Needle Threaders Club and the Mid-Winter Card Club. May was preceded in death by her parents, her husband Charles, her daughter-in-law: Lauretta; 4 sisters: Vera, Bonnie, Ava and Dora; 4 brothers: Harry, Claude, Winfred and Gail. She is survived by her 3 sons: Wilbur Huss of San Augustine, Texas, Gary Huss and his wife Connie of Branson, Missouri, and Jimmy Huss and his wife Cheryl of Manson, Iowa; 8 grandchildren: Douglas Huss and his wife Vickie of San Augustine, Texas, Teri Town and her husband Randall of Cave Junction, Oregon, Richard Huss of San Augustine, Texas, Kevin Huss of Iowa City, Marci Bond and her husband Mark of Ankeny, Monte Huss and his wife Jamie of Hazel Park, Michigan, Toni Tews and her husband Kendall of Palmer, and Lori Thoma and her husband Luke of Clare; 11 great grandchildren; 6 great-great grandchildren; 2 sisters: Opal Kiner and her husband Duane Sr. of Graettinger, Iowa, and Ruby Pritchard and her husband Ernie of De Soto, Kansas; sister-in-law: Delores Lewis of Scranton, Iowa; many nieces, nephews, other relatives and friends.

May Marie Lewis Huss, daughter of Willard Lewis and Minnie Christensen Lewis was born May 12, 1911 on a farm near Bayard, Iowa and died August 20, 2005 at the Jefferson Manor in Jefferson, Iowa at the age of 94 years, 3 months and 8 days. May... View Obituary & Service Information

The family of May Huss created this Life Tributes page to make it easy to share your memories.

Send flowers to the Huss family.