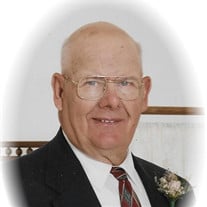 Hastings Funeral Home in Jefferson is in charge of arrangements for Maurice Dillivan, 91 of Jefferson, formerly of Rippey. Maurice died at Greene County Medical Center in Jefferson on November 2, 2018. Services will be 10:30 a.m. Tuesday, November 6, 2018 at Hastings Funeral Home in Jefferson. Visitation will begin Monday at 1:00 p.m., with family present from 5:00 to-7:00 p.m. at Hastings Funeral Home in Jefferson. Memorials are suggested by the family to Hospice of the Midwest and Local Food Bank. Maurice Lloyd Dillivan, son of Lloyd Dillivan and Reaka Heuton Dillivan, was born June 18, 1927 on his parents’ farm in Bristol Township, Greene County, Iowa. Maurice died November 2, 2018 at the Long Term Care Center of the Greene County Medical Center in Jefferson. He was 91 years of age and a lifelong resident of Greene County. Maurice grew up with his two sisters and two brothers. He attended a one room country school and graduated from Scranton High School in 1945. During high school he began his love of football. Maurice joined the U.S. Marine Corps January 3, 1946. He was honorably discharged November 17, 1947. Maurice played semi-pro football for a team in Jefferson. Maurice was united in marriage with LeJane Johnson on August 20, 1950 at the First United Methodist Church in Rippey. They were blessed with five children: Angela, Andrea, Brenda, Kim, and Lori. On the farm, Maurice and LeJane worked side by side raising their crops. Together they raised a large variety of livestock, as well as flocks of chickens and other fowl. Maurice was a member of the First United Methodist Church in Rippey where he served as a Trustee and was a member of the building committee for the new church. He had also enjoyed his membership in the Rippey Lions Club. Maurice had a great interest in genealogy and Andrea remembers visiting cemeteries with her father to research family members. Many might know he was a gifted artist and created beautiful pictures. Maurice drew and painted Christmas cards, wonderful treasures for the recipients. His family and friends will know he was an avid collector of toy tractors and would put his skills to work in restoring the tractors that needed some extra love. He acquired his tractors from various places. The family’s basement was full of his collection. However, his greatest love was his family. With his busy life on the farm, he always made time for his children and grandchildren. They could count on his attendance at their many activities, whether it be basketball, football, band concerts, and many others. Maurice was preceded in death by his parents, Lloyd and Reaka; infant sister Velma Dillivan; brothers Larry Dillivan; and Wendell Dillivan and his wife Vivian; sister Marcella Smith and her husband Raymond; brother-in-law Lowell Collogan; sisters- in-law Nadine Anderson and her husband Walter; and Maxine Johnson. Maurice’s memory will forever be cherished by his wife LeJane of Jefferson; his son Kim Dillivan and his wife Mary of Powell, Wyoming; his daughters Angela Brown of Ames; Andrea McFadyen and her husband Don of Ankeny; Brenda Kiner and her husband Stan of Rippey; and Lori Minnihan and her husband Todd of Scranton; sister Waunita Collogan of Jefferson; sister-in-law Marilyn Dillivan of Des Moines; grandchildren, Aaron Brown (Heather); Heather McFadyen; Meredith Emery (Bryan); Jennifer McFadyen; Jessica Kiner; Ivan Dean Kiner; Emily Kiner; Grant Dillivan; Natalie Dillivan; Heidi Minnihan; Zach Minnihan; Ben Minnihan; three great-grandchildren; nieces and nephews; other relatives; and many friends.

Hastings Funeral Home in Jefferson is in charge of arrangements for Maurice Dillivan, 91 of Jefferson, formerly of Rippey. Maurice died at Greene County Medical Center in Jefferson on November 2, 2018. Services will be 10:30 a.m. Tuesday, November... View Obituary & Service Information

The family of Maurice Dillivan created this Life Tributes page to make it easy to share your memories.

Send flowers to the Dillivan family.