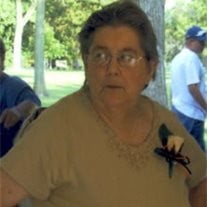 Mary Eileen Warren, daughter of Donald Vernon Todd and Laura E. McDermott Todd, was born July 8, 1943 in Los Angeles, California and died November 5, 2010 in Perry, Iowa, at the age of 67. After leaving California, Mary's family moved to Viola, Wisconsin and then they lived in various places in Iowa including Spencer and Washington. They moved to Jamaica and Mary graduated from Jamaica High School in 1961. Mary married Allen Warren in 1964. They were later divorced and she and her son Tim lived with her parents in Perry. In earlier years, she had helped her family with their A & W businesses. Mary worked as a CNA at the Rowley Memorial Masonic Home for 30 years. She was a member of St. Patrick Catholic Church in Perry and had attended St. Joseph Catholic Church in Jamaica. Mary enjoyed Bingo, cards, going to the casino, but most of all, watching her grandson play sports. She was preceded in death by her parents and her sister Madonna Rae Todd. Mary will be lovingly remembered by her son Tim A. Warren and his wife Angela of Perry; grandson T. J. Warren of Perry and granddaughter Jessica O'Berry and her husband Robert of Trenton, Missouri and their child Zephaniah O'Berry. She is also survived by her brother Larry Todd and his wife Marge of St. Charles, Illinois; nephews Mike and David Todd; cousins, other relatives and friends. Funeral service was held at 10:00 a.m. on Wednesday, November 10, 2010 at Hastings Funeral Home in Perry, Iowa with Father David Polich of the St. Patrick Catholic Church of Perry, Iowa officiating. Honorary casket bearers were T. J. Warren, Randy Meis, Tim Lansman, Larry Nelson and Fred Auen. Casket bearers were Larry Todd, Rich Devilbiss, LaVere Derry, George Millard, Brad Caruso and Randy Vodenik. Recorded music was played at the funeral, including "Testify To Love", "The Dance", "Go Rest High On That Mountain", "What Kind of Girl" and "Here I Am Again". Interment was held at St. Mary's Cemetery at Jamaica, Iowa. Following the service at the cemetery, lunch was provided by St. Patrick Catholic Church Regina Guild and was held in the Hastings Funeral Home lounge.

The family of Mary E. Warren created this Life Tributes page to make it easy to share your memories.

Send flowers to the Warren family.