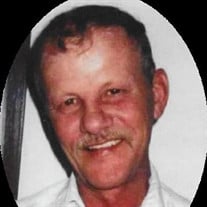 Services for Marvin James Richardson “Jim” were held 10:00 a.m. Saturday, November 23, 2019 at Hastings Funeral Home in Perry. Visitation was after 1:00 p.m. Friday with family present from 6:00 until 8:00 p.m. also at the funeral home. Mr. Paul Smith officiated the service. Casket bearers were: Jamie Richardson, Matt Richardson, Andy Richardson, Clint Comer, John Defenbaugh and Ethan Heileman. Recorded music selected was: Daddy’s Hands, The Dance, The Garden and I’ll See You Again. Interment took place at Franklin Township Cemetery in Cooper, Iowa. Military rites were provided by: United States Army Detail - Camp Dodge, Iowa; Iowa Patriot Guard and American Legion. Following the services at the cemetery was a luncheon at the First Christian Church in Perry. Marvin James Richardson, son of Marvin Andrew Richardson and Ruby Irene Hagwood, was born March 19, 1948 in Jefferson, Iowa and died November 14, 2019 at University Park Nursing and Rehab in Des Moines at the age of 71. Jim, as he preferred to be called, attended country school near Cooper and graduated Jefferson High School. He joined the U.S. Army and was a proud veteran. In 1974 he was united in marriage with Donella Thurman in a double ceremony with Doug and Jody Richardson. Jim and Donella lived northwest of Perry. They were parents of two sons, Jamie and Matt. Jim worked for Burk Ford as a mechanic and then at McAtee Tire, both in Perry. The couple later divorced and Jim married Georgianna Longnecker. They lived outside of Jamaica. Their children were Regina, Jessica and Andy. They later divorced. Jim returned to Perry in 1991 to make his home. He always loved horses and was very fond of being a member of both the Yale and Perry Saddle Clubs. Jim was proud to ride his horses in parades. He also loved his dogs and would take them for rides and to the park. Motorcycles had also been on the top of his list for entertainment. Jim also enjoyed westerns and wrestling on television. However, his children and grandchildren were his greatest love. Some very favorite memories are of Jim joining his family at Spring Lake to camp, fish, and watch the kids skate. Jim loved to build bonfires at his house and join cook outs with his family. He got a lot of joy watching the kids hunt Easter eggs in his yard. His grandchildren already miss him picking them up after school, which he loved. Jim had a long career in the rendering department at Oscar Mayer which later was IBP and then Tyson, from which he retired in 2007. Jim was preceded in death by his parents Marvin and Ruby and step-father Jack Smith. He also was preceded by brothers Jerold, Larry and Douglas, and sister Donna Jensen. Jim is survived by his children Jamie Richardson (Tina); Matt Richardson, both of Perry; Regina Wolf (Adam) of Schaller; Jessica Lestina (Nick) of Bagley; Andy Richardson (Kayla) of Yale; Ashley Carrillo (Gerson) formerly of Perry-now of Florida and Jason Morrison of Des Moines, IA; grandchildren: Destani, Ethan, Nicholas, Shianne, Chelsea, Dylan, Addison, Bryceton, Mason, Lilly, Clayton, Kyle, Collin, Easton, and Emmett; sister Dorothy Smith (Zene) of Carroll; sister-in-law Barb Richardson; other relatives and friends. Memorials in his name may be sent to Box 204.

The family of Marvin James Richardson "JIM" created this Life Tributes page to make it easy to share your memories.

Send flowers to the Richardson family.