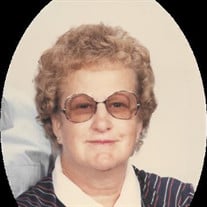 Hastings Funeral Home in JEFFERSON, is in charge of arrangements for Martha Ganoe, 91, of Jefferson. Mrs. Ganoe died Saturday evening at Regency Nursing and Rehab in Jefferson. Funeral Services will be at 10:00 a.m. Saturday, October 6, 2018 at Hastings Funeral Home. Burial will be in the Jefferson Cemetery. Visitation will be Friday, October 5, 2018 after 1:00 p.m. with her family present from 5:00 to 7:00 p.m. Funeral services for Martha Margaret (Nodulski) Ganoe will held at 10:00 a.m. Saturday, October 6, 2018 at Hastings Funeral Home in Jefferson, Iowa. Visitation with family will be held Friday from 5:00 p.m. until 7:00 p.m. at the funeral home. Words of comfort will be given by Bruce R. Webster of the Church of Christ in Jefferson and Pastor Larry Monthei of the Hope United Methodist Parish of Cooper. Honorary casket bearers will be Martha's Grandchildren and Great Grand-Grandchildren. Casket bearers will be Bill Cloninger, Dale Ganoe, Trent Ganoe, Levi Cloninger, Tom Burrell, and Dean Happel. Kenny and Deb Monthei will sing two Hymns; Amazing Grace and In the Garden. Burial will be in the Jefferson Cemetery, Jefferson, Iowa. A lunch will follow at the Church of Christ in Jefferson. Martha Margaret (Nodulski) Ganoe was born on June 3, 1927 to Benjamin Franklin Nodulski and Grace Winefred Morgan in rural Guthrie County and died at Regency Nursing Home on September 29, 2018 at the age of 91 years. Martha lived on the family farm in Guthrie Center until her high school years when she moved to Guthrie Center with her sister, Clara. She and her sister were a singing duet traveling the local area. Their father took the sisters to the RKO Theatre in Des Moines on many Saturday nights to sing on the radio. It was later that Martha met David while singing at the Pleasant Hill Church southeast of Jefferson. Martha and David were married at the Rippey Methodist Church on August 5, 1943. The couple lived for a short time on a small farm near Jefferson. They then moved to Martha's home place, a farm near Guthrie Center. During their time at her home place, all three of their children, Carol, Butch and Joy were born in the same house as Martha had been born. In 1951, the family moved to a farm in the Jefferson area on Rural Route 4 and then lived on several other farms before moving to their current location with all those farms having a Rural Route 4 address. Martha worked for the Midland Power (former Greene County REC) for 45 years and farmed for 75 years. She enjoyed gardening; canning fruits and vegetables; growing flowers as well as being an avid quilter and seamstress. She raised chickens, turkeys, rabbits, cows, pigs, sheep, horses, and an occasional goat and goose. She enjoyed riding her horse, Lady, and later her Tennessee walker, Toots. You could always find her cooking up a bountiful Sunday dinner for friends and family with an occasional Taco Dinner with friends and neighbors. In 2013, Martha and David celebrated their 70th wedding anniversary with family and friends. Martha also celebrated her 91st birthday with family and friends in June 2018. Martha was preceded in death by her husband, David; parents; brothers, Elmer and George (Oscar); sisters, Opal, Fae, Mary, Frieda, and Clara; daughter Joy Luedtke (Orville), son-in-law Lowell Creger, grandson Eugene Venteicher (Kristin), and several aunts and uncles. Martha is survived by her sister, Edith Pontin of Ontario, Canada, her daughter, Carol Creger of Jefferson and son, Francis (Butch) Ganoe (Karen) of Jefferson; eight grandchildren; Bill Cloninger (Sandra) of Jefferson, Angie Happle (Dean) of Houston, Minnesota; Lana Titus of Des Moines, Brenda Ganoe of North Carolina, Dale Ganoe (Jody) of Jefferson, Kay Venteicher-Shulman (Tom Burrell) of Woodbridge, VA, Terry Venteicher (Cathy) of Des Moines and Shelly Reed (Shaun) of Jefferson; 21 Great Grandchildren and 14 Great-Great Grandchildren; family and many friends. Memorials to the family may be sent to the Hastings Funeral Home 403 N. Elm, Box 253, Jefferson, Iowa 50129.

Hastings Funeral Home in JEFFERSON, is in charge of arrangements for Martha Ganoe, 91, of Jefferson. Mrs. Ganoe died Saturday evening at Regency Nursing and Rehab in Jefferson. Funeral Services will be at 10:00 a.m. Saturday, October 6, 2018... View Obituary & Service Information

The family of Martha Margaret Ganoe created this Life Tributes page to make it easy to share your memories.

Hastings Funeral Home in JEFFERSON, is in charge of arrangements...

Send flowers to the Ganoe family.