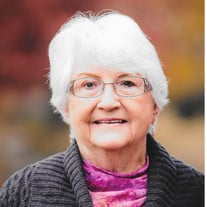 Services for Marjorie Mae Vannatta were held 11:00 a.m. Saturday, January 26, 2019 at the Rippey United Methodist Church. Visitation was after 4:00 p.m. Friday, January 25, 2019 with family present from 6:00 until 8:00 p.m. at the church. Hastings Funeral Home in Perry was in charge of these arrangements. Pastor Paul Burrow provided words of comfort. Honorary bearers were her grandchildren: Margie Braun, Kris McPherson, Bryan Grow, Jason Grow, Kelly Napoli, Jenni Lauer, Myschelle Silbaugh and Melissa Gannon. Musicians were Barb Brock, Dick Bardole and Yvette Bardole. The Rippey Choir sang “The New Twenty-Third” and the Praise Power Trio: Mary Hick, Brenda Roberts and Meladee Graven sang “In The Clouds.” Congregational Hymns chosen were: In The Garden and I’ll Fly Away. Following the service was a luncheon in the church lounge. Marjorie was born August 8, 1931 in a farmhouse outside of La Porte City, Iowa to parents Robert and Marguerite (Leaming) Bryan. She was the youngest of 4 siblings Robert Jr, Pat and John. Midge had perfect pitch and could play practically any instrument by ear. The family farm had milk cows, and her parents exchanged a gallon of milk per music lesson for Midge. When Midge was two years old, their house had a chimney fire. It was winter, and the kids were bundled up and locked in the corn crib for their safety. Midge attended country schools in the La Porte City area until 1942 when the family moved to a farm outside of Dawson, Iowa. The family had a cabin on Myrtle Lake in Minnesota and Midge looked forward to spending time there. In fact, the entire family has spent many vacations and honeymoons at that location. She attended Dawson Community High School where she played basketball. Midge graduated in 1949 and was offered a basketball scholarship at the AIB College of Business in Des Moines, but her parents didn’t want her to travel so far from home. Midge attended State Teachers College in Cedar Falls for one year prior to working as a secretary at the State Hospital in Woodward, Iowa. Midge and John Grow were married in the Dawson United Brethren Church. Besides working hard as a farmwife, Midge was actively involved in her children’s and grandchildren’s lives playing games, basketball, music, vacations in Minnesota, babysitting and childcare. Midge and John were divorced in 1995. In 1997 she and Ben Vannatta were married in the Rippey Methodist Church and lived on their farm NW of Perry. Midge’s hobbies included painting, fishing, cooking and playing cards (her favorites were Bridge and Hand and Foot). She volunteered her musical talent playing piano at churches and choirs, nursing homes and events in the Dawson/Rippey area. She played for the Rebekahs, a service organization (she composed her own music for the Rebekahs March). Midge unselfishly gave both food and money to those in need. She was an excellent example of using God’s gifts to help others. Wisdom that Midge would pass on to others is “leave the room better than you found it.” Midge had a kind and gentle heart. The thing she loved and valued the most in her life was her family. In death, she rejoins her parents Robert and Marguerite Bryan and brothers Bob Jr and John. Left to cherish her memory are her husband of 21 years Ben Vannatta from the Perry Rowley Masonic Home, her sister Pat Girton of Ames, IA, 3 children Pat (Steve) McPherson, Perry, IA, Doug (Pam) Grow, Rippey, IA and Jeff (Lori) Grow also of Rippey, IA, 8 grandchildren Margie (Darian) Braun of West Des Moines and sons Barrett and Colt, Kristen McPherson, Perry, IA, Bryan (Tammi) Grow of Maryville,MO with daughters Bryna and Kora, Jason (Lindsay) Grow of Bondurant, IA with children Jaxon, Kamsyn and Quinton, Kelly (Ryan) Napoli of Cape Girardeau, MO, Jenni (Brandon) Lauer of Perry with children Alyssa, Cameren and Weston, Myschelle (Matt) Silbaugh of Jefferson, IA with daughters Matilynn and Macy, and Melissa (Luke) Gannon with sons Landon and Braylon.

The family of Marjorie Vannatta created this Life Tributes page to make it easy to share your memories.

Send flowers to the Vannatta family.