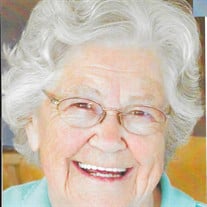 HASTINGS FUNERAL HOME IN PERRY is in charge of arrangements for Joan Allen, 94, of Panora. Services for Marion Joan Allen were held 11:00 a.m. Thursday, January 17, 2019 at the First Christian Church in Panora. Visitation was one hour prior to the service. Officiating was Pastor Gary Freeland. Recorded music selected was “Knowing What I Know About Heaven,” “One Day At a Time,” “Onward Christian Soldier” and “Proud To Be An American.” Interment will take place at a later date at the Richland Township Cemetery in Guthrie County, Iowa. Marion (Joan) Allen, 94, youngest daughter of Archibald and Elizabeth (Young) Lock, was born October 15, 1924 in Bideford, Devon, England. She died January 11, 2019 at Panora, Iowa. Joan attended school in the seaside town of Bideford before her family moved to London in 1937. During World War II she enlisted in the British Auxiliary Territorial Service where she plotted air craft and shipping for the British Army, Navy and Air Force. It is also during this time she met Glenn Allen, an American serviceman from Bagley, Iowa. Joan and Glenn were married December 26, 1944 in Carshalton, England. They lived in England before Glenn’s discharge and return to Iowa in January 1946. Joan and their daughter Marion left England aboard the Queen Mary. Joan became a naturalized citizen in 1949. Joan and Glenn farmed near Bagley for the next 37 years before retiring in 1983 and moving to Bagley. They were the parents of Marion, Bobby, Linda and Beth. Joan and Glenn celebrated their 50th wedding anniversary in 1994. After Glenn’s death in 1998, Joan moved to Panora, Iowa. In 1964 she was honored as one of the five women in the state selected by Wallace’s Farmer Magazine as a “Master Farm Homemaker.” She also was named a “Volunteer of the Years” by Governor Robert Ray. She spent her adult life volunteering with youth and local organizations. 4-H was a big part of their life and Joan was a leader for 20 years in Greene and Guthrie counties. She was inducted into the Iowa 4-H Hall of Fame in 2007. In 2010 Joan was recognized as Citizen of the Year in Panora. She also was featured as one of Lite 104.1 radio’s “Outstanding Women You Should Know” in “Intuition” magazine. Joan helped organize a local chapter of the international organization Trans-Atlantic Brides-Parents Association in 1964 and held all offices locally and in the Iowa/Nebraska state organization. Her English friends became extended family. Joan operated a cake baking and decorating business for nearly 15 years. She spent countless time being an active volunteer with the Bagley Booster Club, 4-H, Girl Scouts, Greenbrier Methodist Church, Bagley Church of Christ, First Christian Church of Panora, area nursing homes, several women’s clubs, Elderbridge Agency on Aging, American Legion Auxiliary, and Guthrie County Veterans Memorial committee. She was extremely proud to be an American citizen. Joan lived on her own until age 92 when she moved to Panora Specialty Care where she resided until her death. Joan never knew a stranger and loved to share stories of growing up in England, serving during World War II and her life in the United States. She touched many lives. Joan was preceded in death by her parents; husband Glenn; son Robert (Bobby); brothers Tom Young and William ‘Bar’ Lock, and sister Winifred ‘Bim’ Seymour. Joan’s parents and siblings all lived in England. Surviving are her daughters Marion (John) Christensen of Panora, Linda Culbertson of Bayard, and Beth (Jerry) Buttler of Panora; grandchildren Steve (Liz) Allsup, Tony (Dani) Allsup, Lisa (Joel) Hester, Ryan Culbertson, Kevin (Brandi) Culbertson, Kyla (Josh) Sporrer, Jackson (Jenna) Stanley and Alli (Phil) Halsey; 16 great-grandchildren; 3 great-great-grandchildren; and a great-granddaughter on the way. Memorials in her name may be sent to Hastings Funeral Home, P.O. Box 204, Perry, Iowa.

HASTINGS FUNERAL HOME IN PERRY is in charge of arrangements for Joan Allen, 94, of Panora. Services for Marion Joan Allen were held 11:00 a.m. Thursday, January 17, 2019 at the First Christian Church in Panora. Visitation was one hour prior... View Obituary & Service Information

The family of Marion Joan Allen created this Life Tributes page to make it easy to share your memories.

HASTINGS FUNERAL HOME IN PERRY is in charge of arrangements for...

Send flowers to the Allen family.