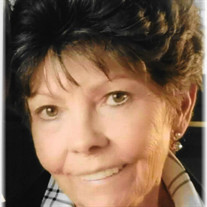 Visitation for Marilyn Hunter was held from 5:00 until 7:00 p.m. Friday, August 28, 2020 at Hastings Funeral Home in Perry. Funeral Services were 10:30 a.m. Saturday, August 29, 2020 at Union Cemetery in Coon Rapids. Bruce Wangler of Word of Life in Winterset provided words of comfort. Music selected was How Great Thou Art by Elvis and Go Rest High On That Mountain by Vince Gill. Marilyn Elaine Hunter, 76, of St. Charles, Iowa, passed away on August 24, 2020 as a result of a seventeen-month battle with colon cancer. Marilyn was born on April 1, 1944 in Jefferson, Iowa to Carroll and Vera (Albright) Stone. After spending several years working at Allied Insurance, Marilyn returned to Bayard and married Gary Hunter, on May 8, 1964. Marilyn and Gary spent forty-nine years living on their farmstead outside Bayard, Iowa. During their time living in Bayard, Marilyn enjoyed gardening, maintaining a beautiful yard, and helping Gary on the farm where she supervised many bean-walking and riding crews. She enjoyed attending her children’s, and later grandchildren’s, sporting and school activities. After moving to St. Charles, Iowa in 2013, she loved making her new house a home, which included many purchases from QVC. She was very well-known for her excellent apple pies, graciously passing the skill onto her grandchildren. Not only was Marilyn a very hard-working, loving, and generous person to all those close to her, she was also an extremely dedicated mother and grandmother, leaving behind the lesson that there is nothing more important than family. During their fifty-six years of marriage, Gary and Marilyn took several memorable trips through membership of the John Deere Spader Group, which included Corpus Christi, Niagara Falls, Montana, Albuquerque, New Mexico, Acapulco, France, Italy and Monte Carlo. They also spent winters in Ft. Lauderdale, Florida. Marilyn is survived by her husband, Gary; children Nickie Hunter of Winterset, Iowa and Nancy Hunter Schreier and her husband Rick Schreier of Story City, Iowa; grandchildren Mikaela Hunter, Cael and Courtney Schreier, and Marshall Engnell. Marilyn is also survived by four brothers and four sisters. Marilyn was preceded in death by her parents, Carroll and Alice Vera (Albright) Stone, and her father-in-law and mother-in-law, George and Mildred (Calder) Hunter. Marilyn was a generous and loving wife, mother, and grandmother. Most important to Marilyn was her family and private time spent with those close to her. Memorials will be distributed by the family at a later date and may be sent to Hastings Funeral Home 1417 2nd Street – P.O. Box #204 – Perry, IA 50220.

The family of Marilyn Elaine Hunter created this Life Tributes page to make it easy to share your memories.

Send flowers to the Hunter family.