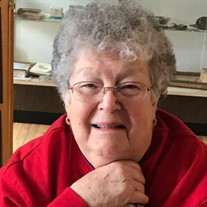 Hastings Funeral Home in Jefferson is in charge of arrangements for Marie Ellen Moran, 87, of Granger. Marie died March 30, 2022 at Granger Nursing. Funeral Services will be held 11:00 a.m. Saturday, April 2, 2022 at St. Brigid’s Catholic Church in Grand Junction. Visitation will start at 9:30 a.m. until the time of service. Marie Ellen Kersey Harper / Moran was born March 11, 1935 to Harry and Adabelle Kersey. She was called home on March 30, 2022. Marie grew up in Grand Junction. She was the second child of ten. Marie attended St. Mary’s Academy in Grand Junction, then attended and graduated from Grand Junction Public High School in 1954. After high school Marie married Russ Harper. They had five children, Richard, Robert, Michael, Kris, and Harold. After Marie and Russ divorced, she raised her children in Grand Junction. Marie was a devoted Catholic with a strong faith. After raising her children Marie married James Moran. Marie loved to be outside either tending to her garden or her flowers. She was a member of St. Brigid’s alter society and served on many committees. Marie also was a member of Businesswomen and the American Legion Clubs in Grand Junction. She volunteered at the Greene County Food Pantry and Greene County Hospital as a Pink Lady for many years. Marie was preceded in death by her parents, husband James, sons Robert and Harold, granddaughter Marcie Harper, and brother Bob. Marie is survived by her sons, Richard Harper (Rob) of Whitmore Lake, Michigan, and Michael Harper (Jean) of Lawton, OK; daughter Kris Harper (Suzanne) of Windsor Heights, IA; brothers, Leo, Bernard, and Henry; sisters Loretta, Joyce, Frances, Rosemary, and Theresa; nine grandchildren; great-grandchildren; nieces and nephews; and many friends. Memorial gifts may go to the Grand Junction Public Library, the Grand Junction Fire & Rescue, or St. Brigid’s Cemetery Fund. DIRECTIONS TO WATCH LIVE STREAMING OF SERVICE 1. Go to your web browser and type in www.facebook.com/hastingsfuneral 2. Or type in Hastings Funeral Home Perry, Iowa 3. Click on our funeral home website 4. Click on the blue bar that says WATCH VIDEO It should say LIVE in red up in the left hand corner of the video

The family of Marie Ellen Moran created this Life Tributes page to make it easy to share your memories.

Send flowers to the Moran family.