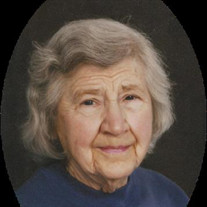 Hastings Funeral Home in JEFFERSON is in charge of arrangements for Margaret L Lux, 88, of Jefferson. Margaret died at the Regency Park Nursing and Rehabilitation facility in Jefferson on Oct 6th 2018. A graveside service will be held Friday, Oct 19th at 10:00 a.m. at the Jefferson Cemetery. Memorials in her name may be mailed to Hastings Funeral Home, PO Box 253, Jefferson, IA 50129. Margaret Lucille Lux, daughter of John Christian Broders and Helen Ethel Wright, was born January 1, 1930 in Jefferson, Iowa. Margaret died on October 6, 2018 at Regency Park Nursing and Rehabilitation in Jefferson at the age of 88 years. Margaret was a lifelong resident of Jefferson. She was always a hard worker and cared lovingly for her five children. Margaret had worked at Saba’s Bakery, the White Cleaners, but perhaps remembered best as a wonderful baby-sitter. She cared for so many children in addition to her own. In 1964, Margaret was joined in marriage with Orman Lux in Nebraska. The couple owned and operated Bumpers Tap. Margaret was a member of Central Christian Church, enjoyed trips to the casinos and her trips to Las Vegas. She watched some television, but her biggest joy was her family and spending time with them. Margaret was preceded in death by her parents, her daughter and side kick, Helen, husband Orman Lux, and her brother James. She is survived by and will be greatly missed by her daughters, Kathleen Brumbaugh of Humboldt, Iowa; and Janie Tackett of Tioga, North Dakota; her sons, Kent Dzuris (Jolene) of Jefferson, Iowa; and Troy Lux (Suzanne) of Toledo, Iowa; precious grandchildren Lance Dzuris (Krystal) of Jefferson, Iowa; Steven Dzuris of Jefferson, Iowa; Todd Lux (Christie) of Florida; Patty Hersel (Dean) of Tioga, North Dakota; John Wyckoff (Jennifer) of Dakota City, Iowa; Kyle Lux of Ankeny; Erik Lux of Coralville, Iowa; Amanda Kelly (Josh) of Jefferson, Iowa; great-grandchildren, Haleigh and Chloe Dzuris; Aleigha and Nadya Dzuris; Jessica and Sara Lux; Samantha Hersel; Bayleigh Wyckoff; Nevaeh Kelly; her sister Pauline Borst (Bill Allen) of Jefferson, Iowa; and cousin Dean Wright (Helen) of Downey, California; nieces and nephews, other relatives and many friends.

Hastings Funeral Home in JEFFERSON is in charge of arrangements for Margaret L Lux, 88, of Jefferson. Margaret died at the Regency Park Nursing and Rehabilitation facility in Jefferson on Oct 6th 2018. A graveside service will be held Friday,... View Obituary & Service Information

The family of Margaret Lucille Lux created this Life Tributes page to make it easy to share your memories.

Hastings Funeral Home in JEFFERSON is in charge of arrangements...

Send flowers to the Lux family.