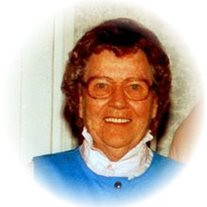 Lucile Keeney, daughter of Clyde R. and Delila Elizabeth Wright Morlan, was born February 9, 1918 at her parents' farm in Greene County, Iowa and died September 27, 2010 at her granddaughter's home while under the care of Iowa Health Hospice in Des Moines, Iowa at the age of 92 years, 7 months and 18 days. Lucile grew up on her parents' farm in Greene County and attended school in Scranton until the eighth grade. On March 10, 1967, Lucile was united in marriage with Ralph Keeney. The couple made their home at Davenport and later Moscow, Iowa. After Ralph's retirement in 1979, the couple moved to Grand Junction. Prior to her marriage, Lucile worked at EMCO in Des Moines as a welder and also worked on the farm while raising her family. She was a member of the First United Methodist Church in Grand Junction and the United Methodist Women. She greatly enjoyed her church group. Her hobbies included visiting with friends and family, sewing, crocheting, and fishing. Lucile was preceded in death by her parents, her husband Ralph on May 8, 2002, her son Clyde Teuscher, grandsons Pat Larry and Jerry, her brothers: Willard and Leonard Morlan; sisters Ethel Kinkennon, Lavon Finley, Lily Rogers, Ruby Morlan and Mary Millard and a step-son: William Keeney. She is survived by her children: LeRoy Teuscher and his wife Alpha of Des Moines, Iowa; Freida Horton of Austin, Texas; Eleisa Murphy and her husband Jere of Mt. Ayr, Iowa, and Lorna Amsden of Des Moines, Iowa; two step-daughters: Judy Reese and Becky Weercamp of Pennsylvania and a step-daughter-in-law: Debbie Keeney of Pennsylvania. She is also survived by numerous grandchildren, great-grandchildren and great-great-grandchildren; a brother: Richard Morlan and his wife Audrey of Scranton, Iowa; three sisters: Opal Olson of Buffalo, Wyoming; Zelpha Carpenter of Ames, Iowa and Donna Davis and her husband Gerald of Ft. Dodge, Iowa; numerous nieces, nephews, other relatives and many friends.

Lucile Keeney, daughter of Clyde R. and Delila Elizabeth Wright Morlan, was born February 9, 1918 at her parents' farm in Greene County, Iowa and died September 27, 2010 at her granddaughter's home while under the care of Iowa Health Hospice... View Obituary & Service Information

The family of Lucile Keeney created this Life Tributes page to make it easy to share your memories.

Send flowers to the Keeney family.