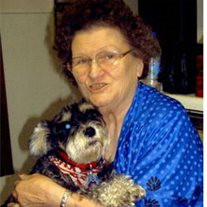 Louise Darlene Davis, daughter of Clara Mozell Kelley and Alva George Schmidt, was born January 29, 1931 at Grand Junction, Iowa, and died October 19, 2008 at the Mary Greeley Medical Center in Ames, Iowa, at the age of 77 years, 8 months and 20 days. Louise Davis's funeral service was held at 10:00 a.m. Friday, October 24, 2008 at the Gospel Open Bible Church in Jefferson, Iowa. Words of comfort were from Pastor Charles Cole of the Gospel Open Bible Church, and Rev. Gerald Pettit. Honorary Casket Bearers were Branden Smith, Anthony Hennings, Melissa Smith, and Andy Quirk. Casket Bearers were Chris Quirk, Chad Sloan, C.J. Hennings, Eric Bellinghausen, Ricky Hennings, and Steve Murphy. Sheryl Sloan was the organist. Recorded music included It's My Life, Go Rest High On That Mountain, and When I Get Where I'm Going. Interment was in the Jefferson Cemetery in Jefferson, Iowa. Everyone was invited for lunch and fellowship at the church following the cemetery service. Hastings Funeral Home of Jefferson was in charge of arrangements. Louise attended rural schools in the Grand Junction-Spring Lake Area and graduated from Gowrie High School in 1949. On August 4, 1950 she married Richard LaVere Davis at Atkins, Arkansas. They were parents of three children; Carolyn, Connie, and Roger. She worked at the Greene County Hospital as a cook for many years; cooked at all three schools in Jefferson; and at Bordenaro's Deli. Louise enjoyed her work at the Truck Haven Caf� where she spent many years cooking and also socializing. She loved people, and after Dick's death in 1988, the hours there helped fill the big void in her life. Louise had helped Dick with their nursery business and she continued as bookkeeper for the family business from 1992 until 1996. She kept busy with many crafts including ceramics, rag rugs, and rag dolls. She made quilts, sewed, did chem. painting, enjoyed puzzles, cards, and, of course, cooking. Louise kept a big garden in earlier years, helped with Blue Birds and Camp Fire Girl's, and helped at her church, Gospel Open Bible Church. Louise's little dog, Abby Lou was very precious to her. Her family loves the memory of her playing "Pac Man" and she was a whiz. In addition to her husband, Louise was preceded in death by her parents; two sisters in infancy; and her sister Marilyn Johnson. She is survived by her daughters: Carolyn Sloan and husband Phil; Connie Hennings; and son Roger Davis; all of Jefferson, Iowa; 8 grandchildren: Melissa Smith and husband Branden; Chad Sloan and wife Kara; Eric Bellinghausen and Kashia Mobley; Ricky Hennings; all of Jefferson; Anthony Hennings and C.J. Hennings both of Omaha, Nebraska; Chris Quirk and wife Alicia of Jefferson and Andy Quirk of Ames; 14 great-grandchildren: Gerrick, Dylan, and Monica Smith; Izabelle, Jordan, Ethan, and Lillian Sloan; Logan, Seth, Gavin, and Corbin Bellinghausen; and Cole, Cayla, and Cameron Quirk. Louise is also survived by her sister Lucille Geisler and her husband Albert of Paton; nieces, nephews, other relatives, and many friends, memorial maybe sent to Hastings Funeral Home 403 North Elm ~ www.hastingsfh.com 515 386 8181~ [email protected] Jefferson, Iowa 50129

The family of Louise D. Davis created this Life Tributes page to make it easy to share your memories.

Send flowers to the Davis family.