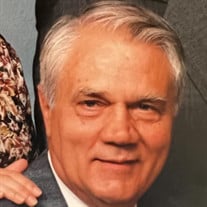 Hastings Funeral Home in Jefferson is in charge of services for Louis Livingston, 88 of Omaha and Glidden area. Louis Funeral will be on Saturday December 11, at 10:00 a.m. at First Presbyterian in Glidden, with burial in the Meryl Hay Cemetery, in Glidden. Visitation will be held at Hastings Funeral Home in Jefferson on Friday December 10 after 1:00 with the family present 6:00 till 8:00p.m. Louis Keith Livingston, son of Louis Edgar Livingston and Helen Avis Haselton, was born April 13, 1933 on the family farm in Carroll County, Iowa. He was the youngest of 4 children. Louis attended a single schoolhouse where he made fire every day in the winter. His father petitioned the town of Glidden for him to attend the public school in town to have a better education. Louis graduated from Glidden High School in 1951. He met the love of his life Joan Emmert at Buena Vista College in Storm Lake, Iowa. The two were united in marriage on August 3, 1958. The couple was blessed with two children Jeffrey and Linda. Louis earned his degree in Chemistry and applied that knowledge in the gas industry. He worked for Northern Natural Gas for a few years before he spent the rest of his career with Metropolitan Utilities District, freezing and liquifying gas among other things. Louis continued to drive to Iowa nearly weekly, up until his departure from earth, to stay in his home in town and chat with his local friends. He enjoyed watching the corn & soybeans grow as well as harvest time. Louis followed the stock prices daily and enjoyed selling at the perfect moment. Louis and Joan purchased a mobile home in California to allow Joan the opportunity and grant her wish of being an involved grandparent. Louis was truly a "snowbird" as he would come out from November to March or April to enjoy the warm weather and make memories with the grandkids. He picked them up from school every day and got them ice cream. Louis and Joan’s last trip together was for Jeff and Maggie's wedding in 2016 in Houston, Texas. The entire family rejoiced in the occasion and wonderful memories were made. Louis was with Joan when she passed away in the hospital in California. They were married for 59 years and set an example of what marriage was all about. Love, patience, forgiveness, and being there for each other through thick and thin. Louis endured so much, but rarely if ever would ask for help. He enjoyed the simple things in life, a good story, a long-distance drive to get the best caramels or fireworks, and he was a connoisseur of pickles, ice cream, and caramel apples. Louis could pick out the best watermelon, musk melon, and tomato on any given day. For enjoyment, he would play the ponies, read the Glidden Graphic, or walk along the boardwalk in Seal Beach when visiting in California. Louis was preceded in death by his father Louis, mother Helen, brothers Stewart & Allan, sister Ruth, and wife Joan. He is survived by son Jeffrey and daughter in law Margaret Livingston, and daughter Linda and son-in-law Andre Gallardo; three grandchildren: Abigail, Daniel, and Emma Gallardo.

Hastings Funeral Home in Jefferson is in charge of services for Louis Livingston, 88 of Omaha and Glidden area. Louis Funeral will be on Saturday December 11, at 10:00 a.m. at First Presbyterian in Glidden, with burial in the Meryl Hay Cemetery,... View Obituary & Service Information

The family of Louis Keith Livingston created this Life Tributes page to make it easy to share your memories.

Hastings Funeral Home in Jefferson is in charge of services for...

Send flowers to the Livingston family.