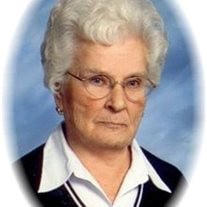 Lorna Leona Charlet, daughter of William Thuernau and Marie Keup Thuernau, was born August 29, 1921 at Andover, South Dakota, and died December 4, 2007 at her home in Minburn, Iowa, at the age of 86 years, 3 months and 5 days. Lorna attended school at the Pleasant View School District #59 one-room school in South Dakota. She remembered having no classmates among the 30 students who attended there. Lorna stayed home and helped, but hired out for housework until at age 18, attended National Youth Association where they taught her how to sew. During WW II Lorna went to Pierre, S.D. where she learned how to weld. She worked at the Lake Washington shipyards at Kirkland, Washington from 1942-1945. Lorna quit work to return home to care for her mother. Later she moved to Des Moines to be near friends and a step-aunt. She met Frank Charlet at a square dance in Des Moines and they were married 3 months later on June 9, 1947. Frank and Lorna were parents of three sons: Frank Dale; Daryl Lee; and Dennis Keith. They were blessed with 26 years of marriage before his death on July 4, 1973. Lorna continued to live on the farm near Minburn and later moved into Minburn to make her home. Lorna adored her grandchildren and loved to play with them all day long. She enjoyed taking them bowling. Lorna was a wonderful grandmother not only to her own grandchildren, but reached out with love to all children. She currently was grand mothering the neighborhood kids. Lorna was good to so many folks, doing whatever she could to make their lives easier, including providing transportation. She was filled with good humor and friendliness. Lorna enjoyed her memberships in the Minburn United Methodist Women; Osborne American Legion Post Auxiliary in Minburn; Good Neighborhood Club and Silver and Gold Senior Citizens Potluck. Her coffee group was very special to her. Lorna was an excellent baker and known especially for her cookies and pies. Lorna was preceded in death by her parents; husband; 2 sisters: Marcella Honey and Anita Wolfgang; and 5 brothers: Glenn, William, George, and Harland Thuernau and Carl Engleson. She is survived by her sons: Dale and wife Barbara of Minburn; Daryl and wife Marsha of Woodward; Dennis and wife Gina of Adel; 8 grandchildren: Jason of Truman, MN; Jeremy and wife Amber of Des Moines; Melissa of Truman, MN; Jared and Adam of Woodward; Aaron and Andrew of Adel; and Mark of Ames; 4 great granddaughters: Alexis, Allyssa, Morgan and Rylee; 2 sisters: Evelyn Nelson and Donna Gries, both of Sioux Falls, SD; nieces, nephews, other relatives and many friends.

The family of Lorna Leona Charlet created this Life Tributes page to make it easy to share your memories.

Send flowers to the Charlet family.