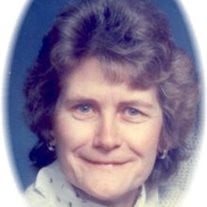 Lorene Ellen Godwin Elliott, daughter of Clark William Godwin and Edna Marie Schnoor Godwin was born December 21, 1938 in rural Dawson, Iowa and died March 8, 2008 at her home in Waterloo, Iowa at the age of 69 Years, 2 Months, and 17 Days. Lorene lived in rural Dawson while attending and graduating from Dawson Consolidated School. She married Robert Elliott on August 17, 1957. They made their home several places including Dawson, south of Perry, and Kansas City for a year. Robert's profession took them to Harlan, Bettendorf, Osceola, and northeast Iowa. Lorene worked as a church secretary, in a bank, but mostly was a housewife and took care of their three children; Dody, Jody, and Tamy. Lorene enjoyed sewing in her free time. She was preceded in death by her parents. Lorene is survived by her husband, Robert; son, Jody (Liz) of Perry; daughters, Dody (Richard) Greve of Camanche, Iowa, and Tamy (Dan) Stecker of San Antonio, Texas; grandchildren, Adrian, Natalie, Madelaine, Sam Elliott, and Nathan Greve; sisters, Luella Olson and Lyla Woods both of Perry; brothers and sisters-in-law, Gary (Sharon)Elliott, and Fred(Cathy) Elliott all of Jamaica; other relatives and friends.

The family of Lorene Ellen Elliott created this Life Tributes page to make it easy to share your memories.

Send flowers to the Elliott family.