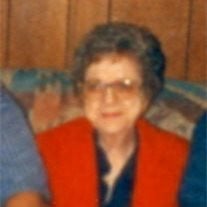 Lois V. Stewart Haines, daughter of Ernest Stewart and Elna Cleeland, was born September 25, 1925 in Fontanelle, Iowa and died December 27, 2008 at the Regency Care Center in Jefferson, Iowa at the age of 83 years, 3 months, and 2 days. Lois started elementary school in Fontanelle before moving to Orient. She graduated when she was 16 years old from Orient High School in 1942. In high school, Lois excelled at vocal music and earned a 4-year letter in basketball. She married Albert "Flab" Haines on March 23, 1946 in Winterset, Iowa. They had one daughter, Kathy. They lived in Greenfield until 1963 and moved to Oklahoma and Arkansas until 1976. Then, they moved to northern Iowa before settling in Jefferson in 1983. In her younger years, Lois served the public in several restaurants in the Orient and Greenfield areas. After being a waitress for several years, she became a homemaker. She was an excellent seamstress and a wonderful cook. Butterscotch pie and meat pies were her family's favorites. She was an avid reader and enjoyed crossword puzzles. Lois also enjoyed spending time with her family and friends. She is preceded in death by her parents, Ernest and Elna ; her husband, Albert "Flab" on March 21, 2004; brothers, Bill (Regina) Stewart, Franklin Stewart, Jack Stewart, and Merle Stewart; sister, JoAnn in infancy. Lois is survived by one daughter, Kathy Friesen (Dean) of DeSoto; one grandson, Steve Friesen (Mashelle Bollie) and her daughters, Alicia and Angela of Des Moines; two brothers, Gene Stewart (Eldeen) of Greenfield and Pete Stewart (Roberta) of Papillion, NE; sister-in-law, Audrey Stewart of Omaha, NE; nieces, nephews, cousins, other relatives, and many friends. In lieu of flowers, memorials may be directed to the family for helping various organizations that support senior living and can be left at Hastings Funeral Home.

The family of Lois V. Haines created this Life Tributes page to make it easy to share your memories.

Send flowers to the Haines family.