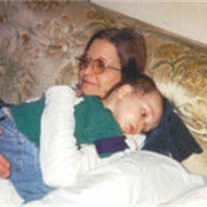 Linda Lou Whelchel Crawford, daughter of Donald Leroy Whelchel and Donna Clark Whelchel was born August 4, 1955 in Perry, Iowa and died June 1, 2005 at her home in Mitchellville, Iowa at the age of 49 years, 9 months and 27 days. Linda grew up in Perry until the family moved to Mitchellville where she atteneded South East Polk Schools. After graduating she attended Des Moines Area Community College. In 1979, Linda was united in marriage to David Crawford. They made their home in Madrid before moving to Mitchellville. Linda was the mother of two children: Heather and John. Linda stayed busy as a child care provider in her home. She was a member of the Church of Jesus Christ of Latter-Day Saints in Ankeny. Linda loved doing geneology on her family, as well as studying astrology and science. She also liked playing with her pets: Alger and Buggsy. Linda loved to study the Bible and to read to her grandchildren, she spent as much time as possible with her grandchildren which was her favorite thing to do. Linda was preceded in death by her father and her sister: Trudy Anksorus. She is survived by her mother Donna Burke of Ankeny, Iowa; her daughter: Heather Andrews of Des Moines, Iowa; her son: John Crawford of Iowa City, Iowa; 6 grandchildren: Christopher, Joshua, Jessica, Jordan, William and Mia; 3 sisters: Teresa Mataya and her husband Mike of Polk City, Iowa, Denise Lowry and her husband Phil of Bagley, Iowa and Jolene McCallister of Redfield, Iowa, nieces, nephews, other relatives and friends.

The family of Linda Crawford created this Life Tributes page to make it easy to share your memories.

Send flowers to the Crawford family.