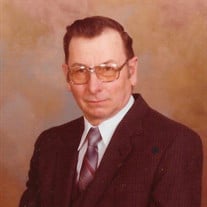 Hastings Funeral Home in Jefferson is in charge of arrangements for Lewis Edward Laub, 90, of Jefferson and formerly of Grand Junction. Lewis died November 28, 2020 at Regency Park Nursing & Rehab in Jefferson. A Celebration of Life Service with military rites will be held 11:00 a.m. Saturday, May 29, 2021 at the First United Methodist Church in Grand Junction followed by a luncheon. Burial will take place at a later date. Louie was born February 26, 1930 in rural Boone County to Harry and Hilda (Osterman) Laub. He went to school in Grand Junction until 6th grade when his family moved to Rippey and he graduated from Rippey High School in 1948. Louie joined the Air Force and was sent to Lackland AFB, San Antonio, TX, for Basic Training in the fall of 1951. On December 26, 1951 Louie married the love of his life, Joyce Challands at the Perry Methodist Church. Louie went on to serve in Korea for a year, and then upon returning stateside, at McChord AFB Tacoma, WA. He was discharged in April of 1955. The couple returned to the area in 1955 and were blessed with two children, Susan and Mitch. Louie worked at various trades throughout his life, including 8 years as a mechanic at the Ford garage in Perry/Rippey. But it would be a few more years before he would open up his own shop. Louie would enjoy many vacations with his family out west, in Colorado, Utah and Wyoming. They became “snow birds” traveling to Texas for over 20 years to escape the Iowa cold. He never lost his love of aviation; he did volunteer work with the Confederate Air Force Museum in Harlingen, TX and building a Piper Cub from scratch with his club buddies. He was an active member of the First United Methodist Church, Grand Junction, serving on various committees and occasional greeter on Sunday morning. He volunteered with the Grand Junction Fire and Rescue Unit for several years. He was hardworking, he loved to garden, and had a soft spot for animals. He will be remembered for his dry sense of humor, his love of polka music, and the special place in his heart for his grandchildren. He was preceded in death by his parents and his brother Russell Laub, nephews Michael Dean Laub and Dennis Jon McDowell, his in-laws George and Anna Challands, sister-in-law Janice McDowell and her husband JD. He is survived by his wife of 69 years Joyce, daughter Susan Holz (Mark) of Aurora, CO, and son Mitch Laub of Mitchellville. Grandchildren include Sarah Elizabeth Goldsmith (Ben) of Fort Collins, CO; Katherine Lea Carroll (Aaron) of Omaha, NE; and Christopher Wayne Subbert of Glidden. Great-grandchildren include Emma Carroll of Omaha and Carter Goldsmith of Fort Collins. Four nephews, other relatives and many friends. Memorials may be sent to First United Methodist Church in Grand Junction, Fire and Rescue Unit in Grand Junction, and also to Hastings Funeral Home Box #204 – Perry, IA 50220.

Hastings Funeral Home in Jefferson is in charge of arrangements for Lewis Edward Laub, 90, of Jefferson and formerly of Grand Junction. Lewis died November 28, 2020 at Regency Park Nursing & Rehab in Jefferson. A Celebration of Life Service... View Obituary & Service Information

The family of Lewis Edward Laub created this Life Tributes page to make it easy to share your memories.

Send flowers to the Laub family.